Home / Home & Garden / A love of gardening shared over 80 years

A love of gardening shared over 80 years

By Teri Carnicelli
Things were very different in Phoenix in 1937. Much of the Valley was still undeveloped, and life was a struggle for many families trying to survive the Great Depression, which wouldn’t end for two more years.

A group of women living in what is now the Encanto-Palmcroft Historic Neighborhood began meeting informally to help each other in their yards. They planned and planted gardens, pulled weeds, and traded flowers and plants. During those hours in the sun, they talked about their families, shared their worries, and enjoyed the support and friendship of each other. 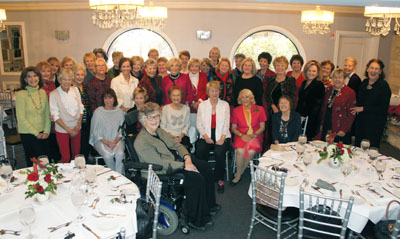 After the gardening was finished, the hostess served coffee, tea and cookies, followed by a good game of Bridge.

They called themselves “The Diggers.”

A year later, as a way to enlarge the group, each woman was asked to invite a friend, and this is how the Diggers Garden Club formally began.

Eighty years later, women from around the Valley still gather once a month to share their love of gardening and to enjoy each other’s company. “There are other garden clubs in the Valley, but to our knowledge we are the largest, consistently operating one,” says Mary Ann O’Neil, current Diggers Garden Club president.

Club members now range in age from the late 50s to the early 90s. Some are still active gardeners, some enjoy visiting others’ gardens and learning about different plants. And one thing remains the same—in order to join, you have to be invited by a current member. And overall membership is limited, so some ladies wait years for a spot to open up.

Peggy Brignall has been a member for 10 years, and served on the board seven times—twice as president. “We all have a common love, and it makes it so easy to fit in,” she says. “It’s quite a joy to work with this group.”

Currently there are 34 active members, and 28 inactive members. The club meets monthly, October through May, at a local venue or at different member’s homes. “We save several months during the year to enjoy each other’s gardens,” O’Neil explains.

There is often a guest speaker from outside the club. “We have heard about everything from compost to chrysanthemums,” O’Neil says.

The club also is very active with charitable endeavors that reflect their passion. Each year at the annual party, donations are collected for a pre-selected beneficiary. This year a little over $600 was donated to the Pioneers’ Cemetery Association, to help fund a project to add more trees and plants to the historic Pioneer & Military Memorial Park in downtown Phoenix.

The ladies also have been ongoing supporters of the North Mountain Visitor Center and were significant funders of the Bird Blind there.

Phoenix has changed dramatically in the last 80 years, growing from a small, struggling desert town to the fifth-largest city in the nation, as of 2017. “One thing has remained constant—the beauty of nature has continued to enchant the Diggers Garden Club, and the fellowship of our members remains strong,” O’Neil says. “We have thoroughly enjoyed our 80 years of ‘digging’ together.”