By Teri Carnicelli
Four years ago, Suzie Nichols started noticing some changes in her body.

“I was directing an orchestra for a musical, and I noticed that my hands were not doing what my brain was telling them to do,” she recalls. 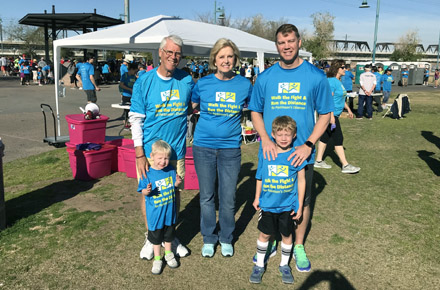 Preparing for the 5K “Walk the Fight/Run the Distance” event on Feb. 10 at Tempe Beach Park are, clockwise from left: North Central residents Nick and Suzie Nichols, their son, Warren, and grandsons Carson, 6, and Marshall, 3 (photo by Teri Carnicelli).

Nichols has a master’s degree in Music Theory and not only worked as a music teacher for several years, but also often volunteered with community and high school theater to direct their musical performances.

Her family also noticed some troubling signs, such as a sort of shuffling walk, with her arms barely moving. And her handwriting had become almost illegible—even to herself.

A visit to the doctor and several tests later, Nichols was diagnosed with Parkinson’s disease, a neurodegenerative disorder that currently has no cure.

In November 2016, she and her husband, Nick, moved to North Central Phoenix from Missouri to be closer to their son, Warren, and their two young grandsons. Before the move, Suzie, 71, researched online what type of support for people with Parkinson’s was available in the Valley. She discovered the Muhammad Ali Parkinson Center at 350 W. Thomas Road, where she now attends classes 4-5 days a week. The center is part of the Barrow Neurological Institute.

Nichols is on several medications, but believes it’s the physical activity that she does daily that has kept the involuntary movements, also known as dyskinesia, from worsening.

“When I am standing still, sometimes my body tends to move without me telling it to,” she says. “But I’m fortunate in that, so far, I don’t freeze when I walk, as some people with this condition do. I am convinced that exercise will help keep the symptoms at bay, by helping to keep my muscles loose.”

April is National Parkinson’s Awareness Month, and the Muhammad Ali Parkinson’s Center offers several resources for those challenged with the disease, including exercise classes. Nichols takes a boxing class on Tuesdays and a Power Circuit class on Fridays. She also, separate from the center, takes a Pilates class with a trainer. She bought a bicycle and takes frequent, short rides to the nearby park with her two young grandsons.

Other classes she enjoys at the center include a speech class—“we often don’t realize we are talking very softly or very fast, so the class helps us really focus on our speech”—and a play reading class, which helps the participants focus on talking with intent and more distinctly.

“They are all so upbeat there, so friendly,” Nichols says of the other clients the center. “Sometimes one of us is having a bad day, and we are all empathetic with each other because we know what that person is going through. We talk about the medications we are taking and challenges we’re having. We are like our own support group.”

To make an appointment with a movement disorder specialist or to learn more about the Muhammad Ali Parkinson Center, call 844-727-2602.