A development by the nonprofit Native American Connections (NAC) planned for the Sunnyslope community that includes a 55-bed rehab center is causing controversy among neighbors adjacent to and near the site at 1431 E. Dunlap Ave.

NAC first acquired the property known as the Mountain Preserve Reception & Conference Center in March 2018 but has been working on a site plan before that, after having viewed the property last fall. The property was first listed for sale about two years ago.

The site currently has a large building dating back to the mid-1960s that has previously been used as a firefighters union hall, and boasts a large courtyard area that has been used for weddings. Area organizations such as the Sunnyslope Village Alliance have used the building in the past for various events and receptions. 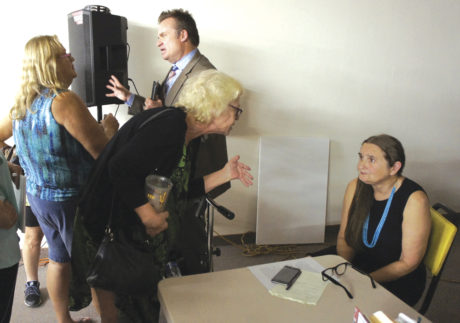 Alan Stephenson, director of the Phoenix Planning and Zoning Department, talks with Peggy Shultz about ambient low-light options for the proposed Patina Mountain Preserve development, while Pat Dowd get assurances from Diana Yazzie Devine (seated), CEO of Native American Connections, that those in the proposed rehab center would not be released on foot into the adjacent community (photo by Teri Carnicelli).

The plan is to remodel that building inside and out, freshen up the courtyard, remodel another small building on the site, and construct a new, three-story multifamily apartment building on the west side of the property.

The development of dining facility with communal educational and crafting space, permanent supportive housing component with 55 units, and large multi-use courtyard are allowed by right under the R-5 multifamily zoning. However, it is the 55-beds for short-term, inpatient drug and alcohol rehabilitation that is causing the roadblock for the project.

In April of this year, the city of Phoenix passed a text amendment to its zoning code specifically related to these types of residentially based drug and alcohol rehab facilities. Any operations related to these kinds of facilities are now required to get a use permit from the city, whereas six months ago there was no need for the use permit, or the associated public hearing before a zoning administrator.

The use permit process required NAC to post a sign on the property regarding the zoning hearing, and to notify via mail all property owners within 150 feet of the project’s address. NAC followed those requirements, but many homeowners nearby—but outside the 150-foot radius—were angered that NAC didn’t make more of an effort to notify them, particularly since this type of project doesn’t typically garner neighborhood support.

They accused NAC of trying to slip the Patina Mountain Preserve project under the radar and drop a bomb on their neighborhood that they contend will significantly harm their property values.

Supporters of NAC point to its long history in Phoenix, and its many high-quality projects that dot the city.

NAC started in Phoenix in 1972 as a grassroots organization to operate a safe haven for Native Americans recovering from substance abuse. Since that time it has grown into a multi-service, community-wide organization, with a host of behavior health and housing programs that serve all members of the community.

“The only program we had at the beginning was residential alcohol and drug treatment. This is not something new for us,” pointed out Diana Yazzie Devine, CEO of Native American Connections.

Some neighbors who were at first opposed to the Patina Mountain Preserve project were invited to tour some of NAC’s other, similar developments, and ultimately spoke in favor of the Sunnyslope plan at the Phoenix Zoning Administrator hearing on Sept. 20. Even one man who lives directly across the street from the project said he is now in favor of it.

But the vast majority of people who spoke at the hearing, as well as a community meeting held on Sept. 6 that drew more than 100 residents, were strongly opposed to it. A website has been launched in opposition to the project: www.ResidentialNotRehab.com.

Many neighbors expressed concerned about the safety of their neighborhood should those receiving treatment decide to simply walk out and not complete the program. Devine said that no one leaves without a structured care plan, and that more than half of those voluntarily seeking treatment have families to go home to. Those who are homeless when entering the program are assigned case managers who work to connect them with permanent, stable housing—whether with NAC or elsewhere—prior to discharge. And those who simply choose not to complete the program are given transportation to their destination of choice—they cannot simply walk out the door with no means of transportation and no destination in mind.

In addition, NAC officials emphasized that its rehab centers do not take referrals from the Arizona Department of Corrections, and in addition to a 30-page medical assessment, background checks are conducted to ensure that no potential clients are registered sex offenders or have outstanding warrants. All employees must obtain a DPS fingerprint clearance via a background check.

Brian Greathouse, secretary for the NAC board and a real estate attorney with Burch & Cracchiolo, said that some residents had asked that a sign be posted clearly stated that there would be “no walk-ins” at this facility, as all intake is done at NAC’s Central Avenue office. He said NAC was amenable to the suggestion.

Neighbors also wanted a commitment from NAC that there would never be more than the 55 beds for the rehab center on this property. Greathouse responded that the request would have to be run through NAC’s finance department and board first to see if such a suggestion was feasible. But he emphasized that NAC wants to work with the neighbors to try to resolve some of their concerns, where possible.

But no amount of reassurance could convince some of those who live right by the site that their property values would not drop with a rehab center for a next-door neighbor. Three of the residents who spoke at the zoning hearing worked in residential and commercial real estate, and one said he would move out of the neighborhood if this facility was built.

The potential adverse impact to the neighborhood can’t necessarily be predicted in advance. Most concerns are speculative, at this point—but that doesn’t make them any less real for the people who live, and work nearby.

Peggy Huffman is one of the owners of Montessori Day School, which serves children ages 3 through middle school. She expressed concern that her enrollment could drop if parents learned that a residential rehab center was to be built less than two blocks from her school. But in the zoning code, placement near schools, churches or other community gathering places is not prohibited for these “community residence centers.”

Under the terms of the new use permit for these types of centers, the facilities: cannot be within 1,320 feet of a similar home or center; must have a maximum lot coverage of 25 percent; must provide a minimum of 100 square feet of usable outdoor open space per bed; and must allow vehicular access only from an arterial or collector street.

The basic use permit conditions also still exist, which state that use will not cause an adverse impact on adjacent property or properties in the area. Adverse impacts would include, for example: a significant increase in vehicular or pedestrian traffic in adjacent residential areas; emission of odor, dust, gas, noise, vibration, smoke, heat, or glare at a level exceeding ambient conditions; and contribution in a measurable way to the deterioration of the area or contribution to the lowering of property values.

It is that last one that neighbors are focused on. Some noted studies that reflect a similar drop in property values, however, it was pointed out many of those studies include methadone clinics, which are non-residential. In addition, NAC does not administer methadone as part of its treatment plan.

The granting of a use permit is at the zoning administrator’s discretion. Zoning Administrator Frank Dolasinski exercised the option to “take it under advisement,” which meant he has no more than 30 days from the Sept. 20 hearing date to make his ruling. Neighbors have already stated that should Dolasinski approve the use permit, they will file an appeal with the city’s Board of Adjustment, which likely would hear the case in November or December.