Luxury apartments get OK from city

By Teri Carnicelli
The Phoenix City Council last month voted 6-2 to approve a planned urban development (PUD) zoning change for a luxury apartment development just east of 7th Street on Stella Lane. More than 40 residents attended the meeting in opposition to the zoning change, and many said they were extremely disappointed in the council’s decision, but also not that surprised, as the city has been very pro-development in the last several years. 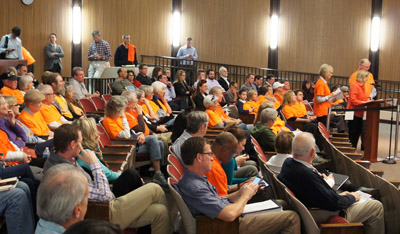 Mary Crozier, president of the North Central Phoenix Homeowners Association, with support from a large contingent of orange-shirted supporters, speaks to the Phoenix City Council at its Dec. 13 meeting in opposition to a rezoning request to allow high-density apartments in the neighborhood south of Maryland Avenue and east of 7th Street (photo by Teri Carnicelli).

Alta Marlette, a project of Wood Partners, is a luxury rental community proposed for just under 4 acres between Stella Lane and Marlette Avenue, east of 7th Street. The bulk of the project lies behind the strip center that includes Christo’s Ristorante and C&S Sporting Goods, and also just to the north behind Inman & Sons.

The underlying zoning, primarily R-4 and R-5, plus some commercial, allowed for a maximum of 156 units and three stories on that total acreage. Wood Partners wanted 245 units, and came to the city with a Planned Urban Development (PUD) rezoning request, which would allow for the higher density and up to four stories.

The City Council had delayed vote on the zoning change request two times, directing the neighborhood leaders and development representatives to sit down together and try to work out a compromise. The opposition said the density was far too much for this older, quiet neighborhood, which would also cause serious traffic issues for those trying to enter/exit the development off Stella Lane. However, traffic engineers from the Streets Transportation Department signed off on the traffic study submitted by Wood Partners, which commissioned the study from J2 Engineering.

The study showed a regular “gap” period between the lights at Maryland Avenue to the north, and Rose Lane to the south, which would allow several cars to safely turn left only 7th Street from Stella, even during rush hours.

Neighbors contend that the bulk of vehicles exiting the property were much more likely to turn right, and then cut through the neighborhood using Maryland Avenue—which puts them in the direct path of children heading to Madison Traditional Academy at 10th Street.

Jamie Blakeman from J2 Engineering responded that while many cars probably will turn right, those drivers more than likely would head up to Glendale Avenue before turning east, and pointed out that no one would deliberately choose to get caught in school zone traffic.

Nonetheless, traffic already is an issue in this neighborhood, and adding more than 200 additional residences will only worsen the problem, said Mary Crozier, president of the North Central Phoenix Neighborhood Association, one of more than 15 neighborhood groups that had joined together in opposition of the re-zoning request.

Crozier and some of the other more vocal opponents had been called out for not actually living near this development site. However, Crozier pointed out this zoning change would open the door for other developers interested in high-density infill projects in Central Phoenix, who would use the PUD method to get around existing, lower-density zoning. Approval means the city now has this precedent on its books.

While a meeting, facilitated by Mayor Greg Stanton, was held between neighborhood leaders and representatives of the developers in late November, no progress was made. The opposition group was then shocked to hear at the Dec. 13 city council meeting that the developers had agreed to 229 units, after working directly with Councilman Michael Nowakowski. Though Alta Marlette is not in Nowakowski’s district, Wood Partners had developed the five-story, 230-unit Alta Fillmore in his district in 2016. Alta Fillmore, which sits on just over 4 acres at 601 W. Fillmore St., sold in November for $59 million to a Canadian real estate investment trust.

Residents were visibly angered that they weren’t included in those negotiations and raised concerned about “secret back-door dealings.” They also said 229 units was still far too many for an area that was zoned for 63 less than that number.

Atlanta-based Wood Partners, with offices in Scottsdale, has a history in Phoenix of building, then selling, these types of development within a fairly short time period. Residents argued that this demonstrated their lack of interest in being a part of the “community.”

“Wood Partners is in the flipping business,” Crozier said. “Two years from now it is highly likely they will be gone [and] we will be stuck with this big box apartment complex and overwhelming traffic problems that the city has no money to fix.”

Kate Gallego and Laura Pastor were the only dissenting votes, with Debra Stark recusing herself in advance of the discussion and vote due to a “potential conflict of interest.”