By Marjorie Rice
Squeezed into a shoebox-size storefront embellished with funky antiques, and working from a postage-stamp kitchen tucked at the back, Chef/Owner TJ Culp and his team at Restaurant Progress are attracting a steady stream of devotees to enjoy an innovative, beautifully crafted menu. 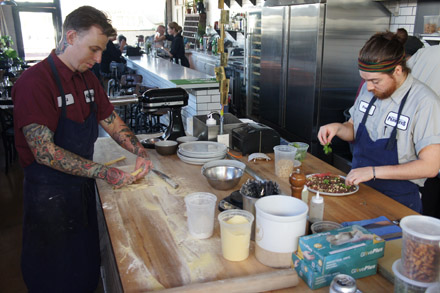 In a kitchen that’s not much larger than what most Valley homes have, Restaurant Progress Chef/Owner TJ Culp (left) preps fresh pasta for the evenings special of Confit Duck Linguini, while business partner and sous chef, Frank Romo, puts the finishing touches on a Beef Carpaccio, featuring crunchy capers and toasted pine nuts (photo by Teri Carnicelli).

Restaurant Progress, which opened last spring in the Melrose neighborhood, is the creation of Culp and his partner and sous chef, Frank Romo. The space, in a small strip that includes Melrose Pharmacy, was cleared and built out by Culp and friends, using salvaged and found items where possible—including furnishings and décor from nearby Melrose-area shops.

“We opened this place with almost no money,” Culp says. “We’re still making changes, like the new tabletops.”

The result is a comfortably chic combination of mismatched chairs, painted brick and exposed roof trusses contrasting with an elegant white marble bar backed by gleaming subway tiles. An old mail sorting chest—a recent Melrose antique shop find—serves as wine storage. Past the kitchen, a patio lush with greenery beckons through large windows. It promises to be a lovely spot for lingering as evenings cool.

“After school, I worked in restaurants starting as a prep cook and working my way up,” Culp recalls. “Then we started the pop-up dinners in my apartment until we had to find a legal location.” Called Pop-Up PHX, the series attracted a loyal following of Valley culinary cognoscenti.

“A couple of years ago, we decided to open our own place,” Culp explains. The team combined limited funding with a lot of sweat equity, and it paid off. Now Culp is planning to expand into an empty storefront next to the restaurant, this time with an off-premise bottle shop. Culp and crew are doing the work themselves, and he hopes to have it open by the end of the year.

Unfortunately, patrons of the restaurant won’t be able to buy bottles at the store to bring into the restaurant, says Restaurant Progress manager Esther Noh, the third member of Culp’s initial team. “The licensing won’t allow us to do that,” she says.

The restaurant seats about 50, including places in the patio, and reservations are encouraged, though walk-ins are welcome at the bar as space permits.

Employees like Noh are family, Culp says. “We couldn’t do this without them. We’ve been careful to put together a group that really enjoys working together,” he adds.

He’s not kidding. Watching the cooks and servers work is like watching an intricate dance, one pirouetting to the stove while another takes his place to finish a course and a server weaves her way into the group to pick up a finished plate. When they’re not working—the restaurant is closed Sunday and Monday—they hang out together.

Culp’s menu is limited, with two starters, two salads, three “mid courses” and four entrees. There’s also a $75 tasting dinner of five courses. Wine pairing is available for an additional $35. The menu focuses on local, seasonal ingredients wherever possible, put together with imagination and panache.

The result is an intriguing selection that’s changes often. On recent visits, it included a lovely combination of beet cured Hamachi ($16) and the customer-favorite soy-cured watermelon ($12) from Blue Sky Farms.

“I took it off the menu for a while, but people kept asking for it, so it’s back on,” Culp says.

The focus on creativity and local ingredients continues behind the bar, where mixologist Alyxandra McMillan has developed all the house cocktails, including the What’s Up Doc? ($13), made with a rum blend, house-made carrot ginger blend, pineapple, amaro, lemon and thyme. All the mixes are house made, McMillan says.

While his restaurant has attracted Valley-wide patrons, Culp is self-effacing about his success. He hasn’t stepped into the local celebrity chef life, preferring to focus on working with his friends at his small neighborhood eatery.