The holidays are upon us, and time can be one of our greatest gifts. 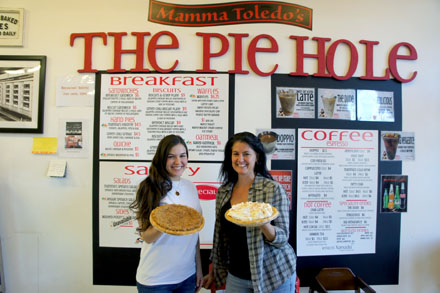 Tonya Saidi, right, owner of Mamma Toledo’s The Pie Hole, holds one of the bakery/café’s most popular pies, a coconut cream, while her daughter, Sarah, shows off another popular pick—the brown sugar peach pie (photo by Teri Carnicelli).

Throughout December we’re on the run—shopping; schlepping gifts, kids and decorations; shopping; wrapping; shopping; cooking, and all the while trying to sandwich in family time and perhaps a few minutes off our feet.

That’s when a quality spot for a quick snack or a pick-up supper can be our ace in the hole.

The menu includes upwards of 50 types of sweet and savory pies in 5- and 10-inch sizes and hand pies. Cream pies. Fruit pies. Sweet potato and pecan pie. Cheesecake. It would take a year to try a different one each week, a worthy goal. Customers can order most flavors with a day’s notice.

Savory selections include pot roast, pork and green chile, and chicken pot pies, along with waffles, cheesecakes, biscuits (I love the cheddar-jalapeno version) and breakfast pies.

The secret to great pie is the crust, and Mamma Toledo’s passes the test: turn one out onto a plate and tap the bottom crust. It’s brown, crispy and not soggy.

Mamma Toledo’s is the creation of Tonya Saidi, a veteran of the Phoenix food truck scene.

Her road to her present role took several detours, beginning with her childhood dreams first of being a truck driver, then being part of a circus. That didn’t pan out, and instead she gravitated to the food business, working in her family’s restaurants in Casper, Wyo.

Eventually, the restaurants were sold and Saidi’s mother moved the family to Phoenix, where she began managing restaurants. Pie always was a staple on the family table.

“My mom would make a pot roast, and the leftovers, with her homemade gravy, would go into a pie,” Saidi says. “I think everything on my menu is something from my mother.”

The professional pie potential first arose when Saidi’s mother fell ill. After her mother died, Saidi began working at a residential care home, where she pampered her patients with pie.

“I had my mom’s cookbooks, including her pie book,” she says. “I made a raspberry pie from scratch and the nurse at the home wouldn’t stop talking about it. After that, everybody had a request. I baked them for gifts. It was my labor of love for everybody I knew.

“So many people would tell me, ‘I haven’t had a pie like this since my grandma.’ It’s like a lost art. Nobody really takes the time to get in the kitchen and do it from scratch.”

Then the Great Recession hit, drying up the real estate industry, and Saidi looked for another path.

“People said go with your God-given talent,” she recalls. “I didn’t have any talent, then I thought, ‘Oh yes I do. People request my pies all the time.’ I was baking them for free and I wasn’t sure if they’d pay. So I put it out for the Thanksgiving holiday and people ordered. The same for the Christmas holiday.”

Saidi bought an old Chevy van and designed a food truck with a black-and-white-and-red all over ’50s vibe. That was in October 2011, and Saidi’s truck was an immediate success at the Valley’s first food truck festival.

“I didn’t sleep for the first three years,” she says. “Once we did 2,500 cups of pie for an event. It was just me and my daughter doing it all. And I was trying to make everything fresh as possible. It was an all-night thing, then jump in the truck and go.”

Saidi opened a brick-and-mortar store near downtown, operating it for a few years before relocating to the current location in April 2017. There’s been a steady stream of customers since. These days, the food truck mostly is used for catering.

One caveat. Everything here is made fresh that day, and sometimes they sell out, so call to see what’s available, and come in early if you don’t want to miss out on a favorite. Also, the “dining area” is postage-stamp sized, but Saidi plans to add a large picnic table outside to take advantage of the wonderful winter weather.