Dogs and doughnuts worth sitting up and begging for

By Marjorie Rice
There’s an old saying that when life hands you lemons, make lemonade.

In a twist on that adage, Brad and Kat Moore, handed lemons by the Great Recession of 2008, decided to make hot dogs. And doughnuts. 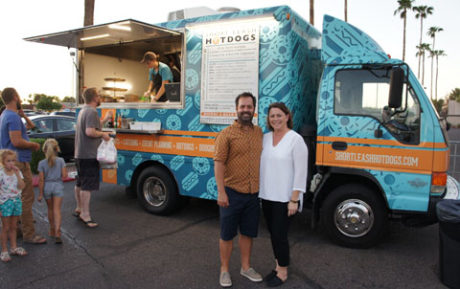 Brad and Kat Moore, the creative team behind the popular Short Leash Hot Dogs food truck, have two brick-and-mortar locations in North Central, one in the Melrose District, and one at the Biltmore Fashion Park (photo by Teri Carnicelli).

All this deliciousness is rooted in professional challenges for the husband and wife team. He was in banking, she was an interior designer. When the recession hit, his bank closed, and her employer hit the wall when home construction came to a screeching halt in the state.

They decided to take a very different road.

“We’ve always been passionate about food, and Kat is an exceptional cook,” Brad says. “When Kat was in college, she wasn’t sure if she wanted to go into culinary or interior design. I talked her out of doing culinary, and here we are, 12 years later, in the food business.

“The food truck was a perfect opportunity for us,” Brad explains. “It was less expensive to start than a brick-and-mortar restaurant, and we could do it on a part-time basis with less overhead. We thought if we love it, great, and if things don’t go well, we’d have the food truck to sell and recoup some of our investment.”

Fortunately for the Moores—and for Valley hot dog aficionados—the business took off, and today encompasses three trucks and two restaurants, with a third on the way.

“We’ve had amazing community support and have been able to grow,” Brad says.

A big reason is the quality of the dogs.

“Our hot dogs are unique,” he points out. “The meat is all natural and nitrate-free and preservative-free. We offer six types, including a vegetarian dog, so we can accommodate any dietary preferences. And we decided to make our hot dogs truly unique, so our topping combinations not just your typical onions, mustard and relish.”

Their best seller is a combo called The Bear. “It sounds weird, but it’s very purposeful,” Brad says. “It’s peanut butter, bacon, smoked Gouda, barbecue sauce and crumbled Cracker Jacks. People think it’s going to be a sweet dog, but I say it kind of marries together like a Thai peanut sauce. The Cracker Jacks give it some texture, but it’s not sweet at all. Kind of like when you put potato chips on a sandwich as a kid.”

All this is packed into puffy naan, Indian-style flatbread.

“I hated hot dog buns because all the stuff just falls out the bottom after the first bite, so we serve all our hot dogs on naan,” Brad explains. “It really holds up well with the dog and all the toppings.”

Their first brick-and-mortar restaurant was on Roosevelt Street in downtown Phoenix. After five years they decided a move to 7th Avenue in the Melrose District was a better fit, which was accomplished in late July. They added Rollover Doughnuts next door, eventually combining the two.

“It’s in walking distance to our house, and we’ve lived in that neighborhood for 17 years,” Brad says. The Melrose location also was larger, allowing them to offer breakfast, lunch and dinner and weekend brunches.

A second location can be found in Biltmore Fashion Square, with a walk-up window and outdoor tables for diners in the Union Shops area.

And now the Moores are planning a third restaurant, at the northeast corner of 19th and Northern avenues in the former location of For Love of Chocolate. That is expected to open in mid-December.

“One of the reasons we’re so excited about being in the 19North community is that it has a lot of the same characteristics in the surrounding neighborhood as the Melrose location,” Brad points out.

Meanwhile, the Moores continue to operate the food trucks that go out three or four times a week, primarily for catering and private functions and corporate events. “We still go out to festivals and street fairs, including second Fridays at 19North,” Brad says.

One more note. What are hot dogs without beer?

“One thing a lot of people may not know about is our amazing selection of beers and whiskeys,” Brad adds. “We have more than 90 beers—many craft beers in cans—and 11 whiskeys at our location on Melrose, representing local breweries and distilleries. We’re really excited about our beer program and our happy hours.”