Home / Cafe Chat / Out with the old, in with the new

Out with the old, in with the new

It seems the area on 7th Street just south of Bethany home Road overnight became a popular dining destination, spurred by the conversion of an old Kawasaki motorcycle sales and repair shop into a multi-use dining and entertainment space called The Yard. 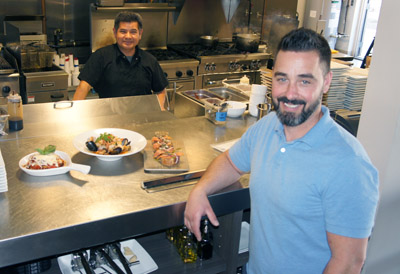 Chef Danny Garcia, left, and Danny Quinn, owner/manager of Pubblico Italian Eatery, say business has been booming since the restaurant opened in late February in the former home of Okra Cookhouse and Cocktails. Some of the more popular items are the lasagna with beef/pork ragu and béchamel sauce; the seafood risotto with Manila clams, calamari, jumbo scallops and jumbo shrimp in a lobster tomato white wine sauce; and the salmon and pesto bruschetta (photo by Teri Carnicelli).

The first concept at The Yard to open was gastro-pub Culinary Dropout, which made its debut in February 2013. Part of the Fox Restaurant Concepts group, it was soon followed by Little Cleo’s Seafood Legend in May 2013.

A small space within The Yard was leased out to Valley chef Silvana Salcido Esparza, who brought her popular “barrio” eatery to the North Central community with the opening of Barrio Urbano in January 2015.

Further down at Missouri Avenue, family business Spinato’s moved from its longtime 12th Street and Glendale location to the Cinema Park Shopping Center in November 2013. Joining them next door was popular Valley-based chain Pita Jungle, which opened in January 2016. And Pomegranate Café, featuring locally sourced organic, vegan and vegetarian fare, opened this year where Scott’s Generations used to be (next to Ace Hardware).

The area between Bethany Home Road and Missouri Avenue is teeming with new eateries and concepts, including The Colony on the west side of 7th Street, which when first launched housed Stock & Stable, Pure Sushi, The Herb Box and Casa Añejo Tacos + Tequila. On the east side of 7th Street, other new eateries were popping up like spring flowers in the desert, including Joe’s Midnight Run, Mora Italian, Cold Beer and Cheeseburgers, and the latest addition, Camp Social.

Another group development, on the east side of 7th Street in the former home of Crown Imports, added Okra Cookhouse and Cocktails, and The Phoenix Ale Brewery Central Kitchen in the redeveloped and re-named Crown on 7th.

But the bloom has fallen off some of these dining “flowers,” as closures have begun to pepper what some are calling an over-saturated dining market.

The first to shut its doors was The Herb Box, which was the first tenant to open at The Colony in April 2016. Founded in 1995 in Scottsdale, The Herb Box began as a catering company inspired by CEO/Owner, Susan Wilcox. The eatery closed abruptly in late April 2017, with a Notice of Business Closure posted on the door from the Maricopa County Environmental Services Department. Several e-mails sent to Wilcox seeking comment about the closure were not answered.

Next to fold up shop was Barrio Urbano, which closed in June 2017. Esparza said the location was challenging, with no front signage and the growing number of competing restaurants.

Okra Cookhouse and Cocktails, a concept by Valley chef and co-owner Cullen Campbell, opened in the Crown on 7th development in September 2015. The Italian-Southern hybrid closed in October 2017. A statement from co-owner Maureen McGrath said the eatery was shuttered because she was relocating to California, but that Campbell would continue to focus on his other eatery, Crudo, which he operates with business partner Micah Olson, at 36th Street and Indian School Road.

Casa Añejo, which opened on Cinco de Mayo last year in The Colony, was a concept from the Arizona-based Evening Entertainment Group, which includes adjacent spots Stock & Stable and Honor Amongst Thieves (upstairs bar). On Jan. 28, the eatery’s Facebook page said it was closing for “renovations.” However, it wasn’t long after that a banner sign went up announcing a hiring fair for a new eatery.

Another restaurant to fold up shop unexpectedly was Joe’s Midnight Run, which was opened in April 2016 by real estate developer, Rick Cordova. The building at 6101 N. 7th St. was originally going to be scraped and turned into a parking lot for a larger mixed-use commercial building located next door. Cordova decided to transform the former Joe’s Drive-thru Liquor into the sort of funky, tasty and music-fueled venues that he loved back in his hometown of Chicago.

In January of this year, it was announced that Bob Mayo, 35-year veteran of the restaurant service industry, was the new owner of the eatery. However, just a short time later (March 5), the doors were abruptly closed on the restaurant, which was popular at nighttime but always struggled with a lunchtime draw. The restaurant’s Facebook page announced the closure, but gave no explanation.

In with the new

Pubblico Italian Eatery opened at the end of February in the former home of Okra, at 5813 N. 7th St. in the Crown on 7th center. Owner/manager Danny Quinn gives high praise to his chef, Danny Garcia, who he says has been “creating amazing handmade pasta and sauces since 1992, so he knows his stuff. It’s been a true team effort all the way with everyone working toward the same goal … to treat our guests like family and make sure they come back again and again.” Current open daily for dinner (starting at 4 p.m.), the restaurant offers an ample menu of appetizers and salads, as well as wood-fired pizzas, homemade pastas, entrees such as seafood risotto and chicken piccata, and a selection of gluten-free options including pizza, ravioli and gnocchi. The extensive menu is available online at www.pubblicoitalianeatery.com. For more information, call 602-601-5651.

Also coming soon to Crown on 7th is Wildflower Bread Co., with dozens of locations around the state and several in the Valley. Darren George, vice president of Development for Wildflower Bread Company, says they’ve long wanted to be a part of this neighborhood. “At Crown on 7th, we see an opportunity to provide healthy and heightened comfort food for breakfast, lunch and dinner in a family-friendly atmosphere at an affordable price point while also employing people from the neighborhood.”

The eatery is scheduled to open in late spring. For updates and menu, visit https://www.wildflowerbread.com.

Local restaurant group Riot Hospitality Group is set to open Farm & Craft in Phoenix, after its original success in Old Town Scottsdale. The new location will open in the former Herb Box space at The Colony, 5538 N. 7th St., sometime in late April. Farm & Craft is focused on healthy and sustainable food. Visit www.ilovefarmandcraft.com for updates and more details.