Arizona rescue organization Boxer Luv will celebrate its 20th anniversary on April 8. For two decades, founder Trish Spencer, a 25-year resident of North Central Phoenix, and her team of more than 350 volunteers have brought new life to homeless boxers in need. 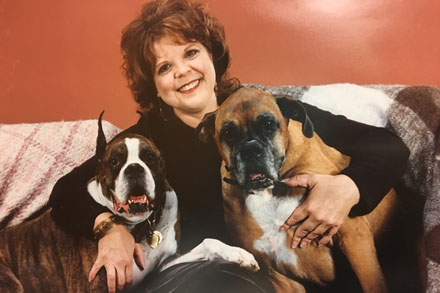 Boxer Luv sprung up as a personal project Spencer began to save Phoenix boxers. What started as a small group that would advertise in local papers expanded into a widespread nonprofit that has now rescued more than 10,000 boxers and boxer mixes throughout Arizona since 1998.

Boxer Luv uses a foster care system as the primary method of rescuing dogs, instead of a kennel facility alone. Boxer Luv has more than 80 approved foster homes.

Spencer never imagined Boxer Luv would grow to its current size and influence. “The reason that I just chose one breed was because I wanted it to be just a little side hobby,” Spencer explained.

Despite having no prior retail experience, Spencer took inspiration from other rescue organizations and opened up the Luv to Save Thrift Shop in at Northern Avenue and 12th Street.

After 20 years of work and dedication, Spencer says she has no plans to slow down. “It’s a very emotionally rewarding thing to do. I don’t regret all the work.” She says that one little moment of seeing a dog adopted into a new home “gives you the joy and energy to go on.”

Boxer Luv will celebrate the anniversary in Tempe’s Kiwanis Park with a picnic on April 8. For details, visit http://www.boxerluv.org.