By Teri Carnicelli
North Central teen Jackson Sriro set out last spring to collect 25,000 pairs of gently used shoes by the end of 2017, he knew it was an ambitious goal. One that he may not achieve. 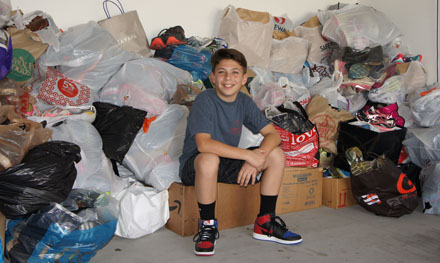 But he persisted, not just because it could earn him a trip to another part of the world, but also because every pair would aid someone in need—children in poor countries who can’t go to school because they don’t have shoes, or adults whose feet are battered and sore because the shoes they have are old and worn.

Jackson’s project was in partnership with Soles4Souls, a not-for-profit global social enterprise committed to fighting poverty through the collection and distribution of shoes and clothing.

Soles4Souls (www.soles4souls.org) has three specific program locations: Honduras, Guatemala and the Dominican Republic/Haiti. The organization gifts shoes directly to those in need, but also helps locals launch micro-businesses by selling the shoes to them at a deep discount, so they can turn around and open their own “shoe store,” reselling the shoes at a modest profit.

Jackson is the youngest person in Arizona to host a shoe drive with a goal of 25,000 pairs of shoes. In the end, he came very close: nearly 20,000 pairs. A large percentage of those shoes were donated through drop boxes at area Orangetheory fitness centers.

Despite falling short, Soles4Souls decided to award him a free trip for two to one the organization’s program site in 2018, where he will help deliver shoes with the not-for-profit organization. Jackson was given the good news on Dec. 21, an early Christmas present for the 13 year old.

“Jackson is an amazing young man and done tremendous work for Soles4Souls,” says Kellen Clawson, Community Partnership Specialist–West for Soles4Souls. Clawson points out that not only did Jackson secure a donated warehouse space in the Scottsdale Airpark area to store the shoes he collected, but the warehouse owner was so impressed, he has agreed to allow his space to be an ongoing storage facility for future Phoenix-area shoe collection programs with Soles4Souls.

“The Phoenix shoe collection program would not be what it is today without all of Jackson’s drive and dedication to the Soles4Souls mission,” Clawson adds. “We are honored to work with such an inspirational young man.”

Jackson’s father, Todd Sriro, says that if his schedule permits, he will purchase a ticket for himself to travel with Jackson and his mother, Jennifer, to either Honduras, Guatemala or Haiti this year—depending on Soles4Souls travel schedule and Jackson’s school breaks from All Saints’ Episcopal Day School. “It’s a good way for all of us to see the outcome of his extraordinary effort,” Todd says.