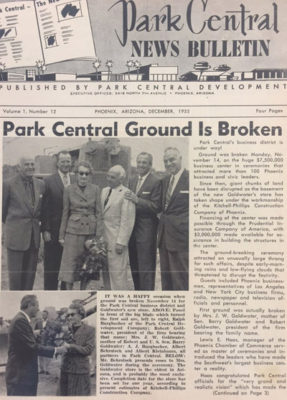 Do you have memories, or memorabilia, to share about Park Central Mall? Arizona State University’s School of Historical, Philosophical and Religious Studies currently is working on a history project about Phoenix’s first official mall, which opened in 1956 at Central Avenue and Earll Drive.

Did you shop there when Goldwater’s was THE department store to go to? Did you hang out in the atrium after school? Did your family own a business at the mall? Come share your memories, photos and mementos during a public History Collection Day, 9 a.m.-2 p.m. Saturday, April 7 in the new Phoenix Public Library @ Park Central, 3110 N. Central Ave.

Microfilm reels, news clippings, antique signage and old photos from the 1950s are among the many items found in a treasure trove discovered underneath the Park Central property as a multi-million dollar renovation is under way by Peoria-based Plaza Companies, in conjunction with Tucson’s Hoalualoa Companies, who acquired the mall last year. Construction is expected to be complete late this year.

Those looking to get a glimpse of Park Central Mall in its early days will be able to do so through a variety of methods. In addition to hard-copy documentation of the treasures found in Park Central’s basement, ASU staff, students and faculty will share their discoveries through social media, a designated website and a special “Park Central: History, Present & Future” event planned for May. The project’s history will also be memorialized on-site as well as part of the renovation process.