By Teri Carnicelli
Valley Metro hosted a special event at the Cholla Library in March to introduce to the public to the local artists who were selected to create design elements for the various segments along the 1.5-mile Northwest Phase II route, which includes three stations, a park-and-ride lot, a traction power substation, and the bridge across the 1-17 freeway to Metrocenter Mall. 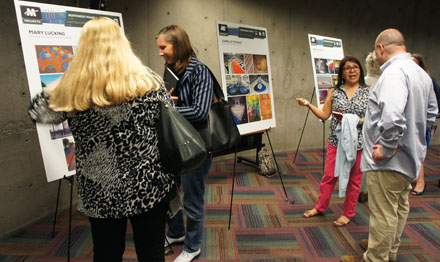 Valley artists who were selected to create works for the Northwest Phase II light rail extension, including Mary Lucking (second from left), Janelle Stanley (right) and Pete Goldust, showed some of their previous works to the public during an open house on March 14 (photo by Teri Carnicelli).

The route will travel up 19th Avenue and eventually cross the freeway at Mountain View Road. Valley Metro has agreed to set aside up to 1 percent of the overall segment’s construction budget, which equates to approximately $1.5 million total for these art installations.

Shindell’s work can be seen along other segments of the light rail route. She has a tile mosaic, titled “Bougainvillea,” that decorates the west-facing wall of the transfer power substation at 19th Avenue and Las Palmaritas. She also has a piece of art on the Mesa route.

Each artist has the freedom to create whatever her or she wants for the space—a mural, a sculpture, a mosaic, or a combination of multiple art elements. The artists will participate in future open houses as they begin to develop their designs, to receive feedback from the public.

The projected opening date of the extension is 2023, three years ahead of schedule, as more funds than first anticipated have come in from a 7/10ths of a cent tax approved by Phoenix voters as part of Proposition 104, which became effective on Jan. 1, 2016. That tax money is used specifically to fund projects outlined in the Transportation 2050 plan.

The work to underground or relocate utilities along the 1.5-mile extension will begin next year.

The station and park at ride at Metrocenter Mall will encompass part of the area where Souper Salad, Tombstone Tactical and Hollywood Hustler currently exist. The city of Phoenix will have to first acquire those properties. While the majority of the buildings will likely have to be demolished, because of the unique and semi-historical nature of the Souper Salad building, it will most likely remain intact and will be incorporated into the light rail station design.