By Emily Garcia
A former FBI agent recently led a workshop that taught the public how to protect themselves in an active shooter situation.

John Iannarelli, a former FBI agent, has partnered with SECCENTRIC’s outreach program, Intelligent Citizen, to provide the public with an understanding of law enforcement reactions to an active shooter situation, the best way for citizens to respond, and elements that should raise suspicion of a planned attack. The Active Shooter Awareness Training seminar was held March 6 at Pointe Hilton Squaw Peak Resort. 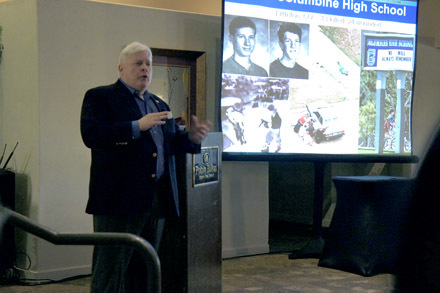 Retired FBI agent John Iannarelli spoke to more than 90 people about what to do in an active shooter situation, during a seminar hosted last month by SECCENTRIC, a Phoenix security and investigation company (photo by Teri Carnicelli).

Iannarelli specializes in law enforcement analysis and a security consultant. During his time with the FBI, he served as the assistant special agent in charge of the Phoenix division and managed all criminal, cyber, and counterintelligence investigations in Arizona.

According to Iannarelli, an average shooting lasts five minutes, and it generally takes police eight minutes to arrive on the scene. It’s rare for the suspect to be neutralized by law enforcement, so Iannarelli encourages everyone to instill a survival mindset.

“You have to be able to save yourself because that’s going to be the first and quickest line of defense,” said Iannarelli.

Three steps to protect yourself in an active shooter situation are to run, hide and fight. Do the step that is appropriate at that moment and use what’s at your disposal to distract the shooter. Fighting the shooter is the last resort. Throw items and try to incapacitate the shooter.

“You only need to be lucky for a second or two and that gives you your chance to get away,” Iannarelli pointed out.

The best opportunity to escape is when the shooter is reloading magazines; being able to identify the sound of gunfire is essential, according to Iannarelli. “It’s not like what you hear on television,” he explained.

Iannarelli urges business owners to implement an emergency action plan that includes evacuation procedures with at least two exits, and an escape plan that should explain how to get out, where to go, and where to reconvene.

He also recommends an emergency notification system. Notify law enforcement, as well as the fire and medical departments. Tell dispatch how many victims need medical attention to send enough resources to the scene. Business owners also need to inform employees of the danger who aren’t present at the time, but might be on their way in.

Companies should have a crisis kit with trauma supplies, handheld radios, and flashlights. In a mass disaster, cell phones won’t be able to make calls because of the lack of cellular signal available.

See something, say something is a strategy Iannarelli encourages when reporting suspicious behavior. Signs that someone might attempt to hurt others include consuming a lot of alcohol, being frequently absent, vague complaints, withdrawing from friends and colleagues, perpetuation to talk about violence and weapons, and a sudden need to collect weapons.

“If somebody is acting up, causing problems, being violent, there should be a system of reporting it,” Iannarelli said.

Editor’s note: Emily Garcia is a student at the ASU Walter Cronkite School for Journalism and Mass Communication.