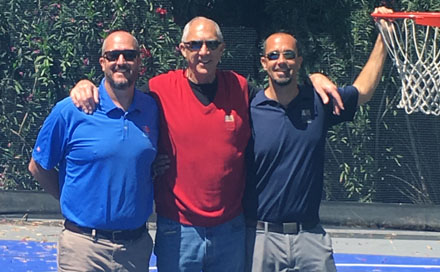 Jim Fox, center, founder of Sport Court® of AZ, has passed the business on to his sons, Jimmy (left) and Mike Fox (submitted photo).

Phoenix resident Jim Fox recalls years of running back and forth across a variety of basketball courts, as both a college athlete at the University of South Carolina, and later as an NBA player for the Cincinnati Royals, Detroit Pistons, Phoenix Suns, Chicago Bulls, Seattle Supersonics, Milwaukee Bucks, and the New York Nets.

When Fox retired from the game in the late 1970s, he didn’t leave the sporting world entirely. Fox was aware of a growing franchise business that constructed both residential and commercial game courts, but branches only existed in Seattle, Salt Lake City and Dallas. He wanted to bring that option to the Valley of the Sun.
So in 1978, Fox founded Sport Court® of AZ, which offers game courts for basketball, volleyball, shuffleboard, pickleball, and roller hockey, as well as a wide selection of gym flooring. The company also constructs tennis courts, putting greens, chipping turf, bocce ball courts, and artificial lawns.

Fox’s sons, Mike and Jimmy, began working for the company as teenagers, installing courts for their dad and learning the importance of good customer service. After graduating from college, both boys became full-time court builders for the family business. They’ve had some high-profile customers in the Valley over the years, including former Phoenix Suns players Jeff Hornacek and Steve Nash.

“Sport Court® of AZ built my first court almost 20 years ago; as a professional athlete and father, I wanted my children to grow up playing on the best equipment available,” Hornacek said.

Sport Court® is best known for its trademark colored cushioned tile surface. The tiles are UV protected, so they stand up to the Arizona sun. They also provide excellent traction, shock absorption, and low abrasion for a safe playing surface. “I especially like that the cushioned surface is easier on your knees and your joints, and the way the ball bounces is similar to playing on an NBA wood floor,” Nash commented.

Adjustable basketball goals, rebounders, custom logos, and court lighting for nighttime play are just some of the options that make each project unique.

Fox, and now his sons, are responsible for more than 4,000 dream backyards, gyms, and school improvement projects across the Valley. They have a BBB Accredited Business rating of A+.

Now a grandfather of five, Fox has passed the business on to his sons, who intend to keep it in the family, perhaps for another generation.