The Arrupe Project at St. Francis Xavier is in its seventh year, and has helped hundreds of students support causes that are most meaningful to them.

“This project starts in the seventh grade, when students sell handmade crafts in the Arrupe Marketplace in our school courtyard and after a Sunday mass,” explained St. Francis Xavier Campus Minister Deborah Westerfield. 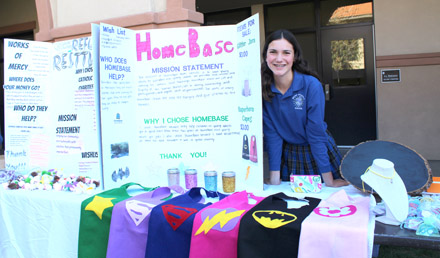 Then in the eighth grade, students must organize a fundraising event.

“The funds they make from the event are then used to purchase whatever the cause or organization is in need of, personally deliver it to them and more often than not, meet who is being benefited by their works,” Westerfield said.

The seventh and eighth grade students were commissioned for their effort during a school liturgy Jan. 20 and earned $10 startup funds. During their classes, students research organizations that are actively engaged in ending inequality. Each student selects an organization to be the recipient of the funds raised. They then speak to an individual at the organization, and determine what their needs are.

After the marketplace and fundraisers are held, the students purchase the items needed with the funds raised.

“What amazes me is the kids, by the end of their Arrupe journey, don’t look at it as just a grade, but it’s something that’s imprinted on them forever,” said Kelsey McKone, who teaches seventh and eighth grade religion.

A guest speaker from Catholic Charities Community Services addresses the students at the beginning of the Arrupe Project. Other students decide they would like to support a charity that might have personal meaning to them such as Phoenix Rescue Mission, Ryan House, PANDA and Foundation for the Blind.

“With the money raised at my fundraiser I was able to purchase helmets, bike chains and bike locks,” he said.

The Arrupe Project has been named the recipient of the 2017 Youth Golden Rule Award from the Arizona Interfaith Movement. St. Francis Xavier School received the award on April 6.  The Arrupe Project also is now a diocesan model that is planned to be implemented in other schools.