Robotics education has reached new levels in the WESD as Orangewood School’s Robocougars competed in the VEX IQ World Championship held in Louisville, Ky., in April. In competition with more than 300 middle school teams from around the world, both Robocougar teams finished in the top third of their programming, driving, and teamwork challenges. 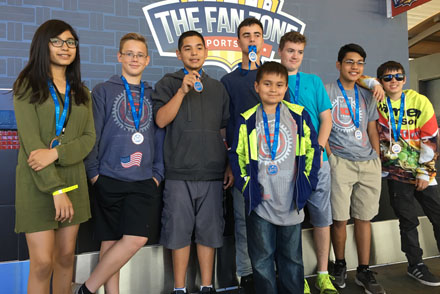 As part of these World Finals, students presented their STEM Research Project, which investigated the impact technology will have on the skilled and unskilled jobs of the future.

During this three-day international tournament, the Robocougars were matched with middle school robotics teams from around the world, collaborating to develop the best strategies for success in the teamwork challenges. Ilan Wieser and Guillermo Garcia were selected to be a part of the Parade of Nations, which showcased the global nature of robotics.

Teams from New Zealand, China, Mexico, Canada, Chile, United Kingdom, and many more joined U.S. teams representing more than half of the United States. Maritza Lopez and Jude Encinas were interviewed live via satellite by Good Morning Arizona, to talk about what the VEX IQ robotics tournament challenge entailed.

Robocougars coach Dianna Bonney said it was a thrilling experience for her and the students. “Each day was 12 hours of each team heading in different directions to keep up with the match schedules. While they were very long days with no time for sitting, it was an incredible learning experience for everyone.”

Bonney added, “We would like to extend our gratitude to the many parents, community members, and WESD staff who helped make this never-to-be-forgotten opportunity possible for our students.”