Make-A-Wish Arizona wanted to grant Camelback High School student Joseph Grant a wish, but Joseph had another idea. The senior gave his wish away to his high school in the form of a new shade structure with outdoor seating. Joseph presented his wish, called “Joseph’s Hangout,” to his fellow students, March 24 at two assemblies. 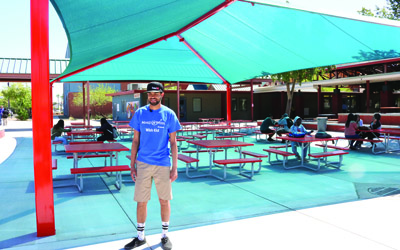 Camelback High senior Joseph Grant stands in front of the new shaded seating area he presented to his school as part of his “wish” from Make-A-Wish Arizona (submitted photo).

Joseph, 18, who has a life-threatening heart condition that required a transplant, has been working on his wish for more than two years, deciding how to leave his legacy to a school that has been amazingly supportive during his illness. He approached then-principal Dr. Quintin Boyce, and with the help of the school, district facilities personnel, and local builders, the wish came true, with construction taking place during spring break.

McCarthy Construction and SunShades Arizona donated a large percentage of the wish, in one of the largest undertakings this year for Make-A-Wish Arizona.

“I first hooked up with Make-A-Wish my sophomore year, when they wanted to know what my wish was,” Joseph recalls. “I wanted to hold off, and then I said, let’s do something for my school. There are a lot of kids here, and they like to congregate outside the cafeteria, and there was no place to sit, and a space like this was very much needed.”

Joseph worked with the companies, and the school to create a plan and color scheme that complements the school colors—orange and blue.

“They wanted to call it Joseph’s Corner, but ‘Hangout’ sounded better,” Joseph explains. “It has a ring to it. I like the way it sounds.”

Joseph’s gift did come with some anxiety.  The seating area replaced the bell tower.  During the assembly he was a little worried. He hoped students wouldn’t remember him as the kid who got rid of the bell tower.

But on the plaque that will designate the space, his true message is recorded: Selflessness is all the heart needs.

Joseph, a former football player at Camelback, also was recognized by the Phoenix Union High School District just prior to his graduation with a Community Outreach Award, presented at the All-Phoenix Union Sports Awards event on May 9.