By Teri Carnicelli
The sea of purple and white that made up the section of the Washington High School Marching Band in the bleachers during the homecoming football game on Oct. 6 was strangely dotted, here and there, with splashes of bright orange. 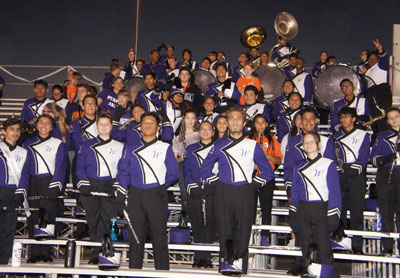 Members of the Orangewood Elementary School Band (some in orange T-shirts) joined with the Washington High School Marching Band for its homecoming football game performances (photo by Teri Carnicelli).

That’s because among all the high schoolers in their spiffy new band uniforms were members of the Orangewood Elementary School Band, sporting their orange T-shirts.

It’s the second year that members from Orangewood, a K-8 school, have joined the high school band during the homecoming game. And it’s all because the two band directors happen to be very good friends.

Jason Landaiche, director of instrumental music at Washington High, and Dominic Colonero, music and band teacher at Orangewood, met while in the marching band at Illinois State. Landaiche and his wife moved to Avondale in 2013. He got a job at an elementary school in Buckeye, but shortly after made the transition to Washington High School. All the while, he kept telling his friend back in the Windy City about the wonderful winters in Arizona, and the cheap home prices.

Colonero, in the meantime, was on the road a lot in Illinois, teaching music programs at six different private schools. He was open to a change.

“Jason kept sending me job leads,” he recalls with a laugh.

“The second I heard there was an opening for a music teacher in the Washington Elementary School District, I called him and told him to apply,” Landaiche says.

Colonero was hired a year ago as the music and band teacher at Orangewood Elementary—which happens to be one of the “feeder” schools for Washington High. Students in grades four through eight can join band, though most members are in the middle school years.

It didn’t take long for the two friends to come up with an idea for their two school bands to get together on occasion, for mentorship, training, and fun.

“Dom’s teaching style is very similar to mine, and we both have similar professional experience as well,” Landaiche explains. So why not bring the two groups together?

So far, members from both bands have joined for Washington High School’s homecoming football games (last year and again this year), and marched in last year’s APS Electric Light Parade, which they will be doing—together—again this year on Dec. 2.

The two music directors are looking for other opportunities for the bands to work together, including some possible joint concerts in the spring.

“The best part has been seeing the high schoolers help the younger kids out, taking that leadership role seriously,” Colonero said.