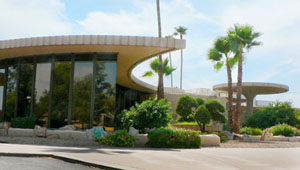 The eye-catching building located at 4401 E. Camelback Road was originally a Valley National Bank and was designed by the architectural firm of Weaver and Drover. The individual designer was Frank Henry, who after leaving Weaver and Drover became an instructor at Taliesin West. The building sports several large dendriform (“tree-shaped”) columns, large rocks sporadically embedded in the exterior walls, and an interior floorplan based on circles and curves. It is one of the stops featured on the Midcentury Banks bus tour on April 1 (photo courtesy of Modern Phoenix).

Kick off the week with cocktails and meet interior designer Julia Buckingham as she introduces her new book, “Modernique.” The free event takes place 6-8 p.m. Friday, March 24, at the Jonathan Adler store at the Biltmore Fashion Park, 2502 E. Camelback Road. Beginning at 7 p.m., Buckingham will discuss blending vintage and modern style to create environments that are truly “modernique.” The book, published by Abrams, will be sold for the first time at this special signing event; hardcover price is $40.

Join Copenhagen Imports at its vintage Ralph Haver-designed showroom located at 1701 E. Camelback Road, beginning at 6 p.m. on Tuesday, March 28, for food, wine and music before Will Bruder, FAIA, speaks at 7 p.m. His topic is “What is Desert Appropriate Architecture?” Bruder has been a student of the Sonoran desert since arriving at Paolo Soleri’s Cosanti in summer 1967. His architectural interventions include civic/cultural buildings, offices, private residences and mixed use multiples. RSVP the number in your party to 602-266-8060 or at http://www.copenhagenliving.com/events/phoenix.

Get some exercise with your culture during the Midcentury Midtown Bike Tour with Greg Kilroy, 8-10 a.m. Saturday, April 1, departing from the Clarendon Hotel at 401 W. Clarendon Ave. Use Phoenix’s GRID bikeshare program to explore midcentury modern architecture with two experts from the Postwar Architecture Task Force of Greater Phoenix. They will get you oriented to the smartphone-friendly bikeshare rental, then take an 8-mile flat and casual ride through Phoenix’s midtown midcentury marvels. Bring your camera. Host Derek Horn will sign copies of his book “Midtown Phoenix.” The tour currently is sold out, but you can join the wait list; the $10 fee isn’t due until the day of the ride. Join the waitlist.

While some of the week’s tours, including the ever-popular home tour, already have sold out, a few were still available as of press time, including the Holy Houses Bus Tour with Doug Sydnor, FAIA, on April 1 ($40), and the Midcentury Banks Bus Tour with Donna Reiner, also on April 1 ($60). Both tours leave from Federal Pizza on Central Avenue with convenient parking across the street in the Windsor/Churn lot.