New therapies help those with Parkinson’s

When Robin Allen, medical office manager, started working at Fellowship Square in Phoenix last April, she noticed that the Parkinson’s patients did not know each other.

She decided to create a Parkinson’s support group, which was launched in July 2016. 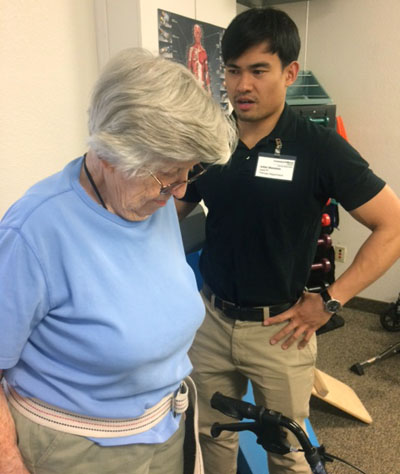 She then noticed that some of the patients were participating in therapy programs at other locations, but it was difficult for them to find transportation. Allen began trying to find a way to create a therapy program on the Christian Care campus.

The “big” portion of the program is the physical therapy piece that uses the principles of exaggerated movements to address limb movements. It has been found to increase gait speed, balance and quality of life.

The “loud” portion is the speech piece; it teaches patients to use their vocal chords in a strong and forceful manner. This therapy addresses the causes of speech problems so that patients with Parkinson’s disease can make themselves understood.

Manaloto, outpatient physical therapist, started his work at Christian Care Health Center in May of 2016, and he is now in charge of the “big” portion of the program. “This program is important because patients with Parkinson’s lack and lose the ability to move and plan their movements. By losing that movement, they get significantly rigid and their balance isn’t great. We try to make these patients move as ‘big’ as they possibly can to overcome the rigidity,” Manaloto explains.

Both Allen and Manaloto said they anticipate that the program will produce great results.

“I’ve probably used this on four patients so far. It has definitely brought some significant changes. For example, I’ve seen these patients be able to turn into their chairs and their walkers without being shaky and unsteady,” Manaloto said.

Community patients are invited to be part of this therapy as well; they do not have to be residents of Fellowship Square. The Parkinson’s support group, which meets on the third Wednesday of each month at 1 p.m., is also open to community patients. For more information about these programs, call Robin Allen at 602-443-5447.