Home / Features / Sharing a love of all kinds of shoes

Sharing a love of all kinds of shoes

By Teri Carnicelli
Jackson Ty Sriro is a fan of shoes. Athletic shoes, mostly, and ones with a lot of eye-catching colors. And while the 12-year-old is limited on what shoes he can wear with his school uniform at All Saints’ Episcopal Day School, he knows that when he gets home, he can put on any pair he likes. The Jordans? Or maybe the Nikes today.

So when Jackson’s parents asked him to think about a charitable project to come up with as part of his Bar Mitzvah celebration this year, Jackson knew it would have to involve shoes. 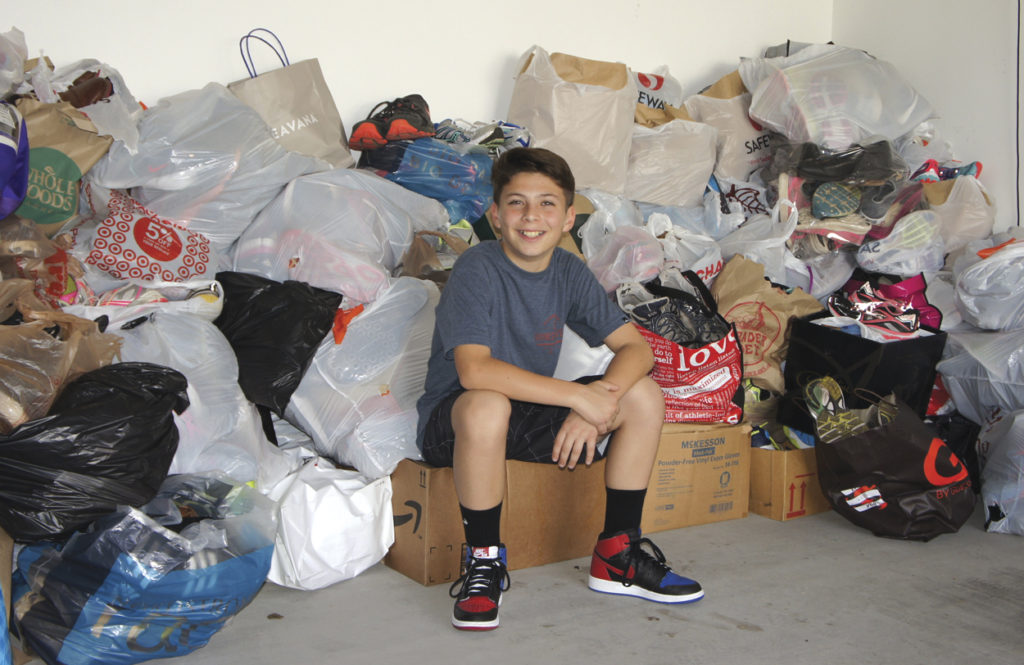 Bags, boxes and stacks of donated shoes began piling up in Jackson Sriro’s North Central home before some generous members of the community donated warehouse space and storage pods to start housing them in until he hits his goal of 25,000 pairs (photo by Teri Carnicelli).

His research helped him discover that there are children around the globe who wake up every day without shoes to put on, and who can’t go to school because of their lack of footwear.

Or, their shoes are so old and battered that they start to develop foot problems at a very young age.

Jackson’s challenge was to find a way to get gently used and new footwear from Phoenix to where it was needed most.

Eventually, with help from his mom, Jennifer, Jackson came across Soles4Souls, a not-for-profit global social enterprise committed to fighting poverty through the collection and distribution of shoes and clothing.

Soles4Souls has three specific program locations: Honduras, Guatemala and the Dominican Republic/Haiti. The organization gifts shoes directly to those in need, but also helps locals launch micro-businesses by selling the shoes to them at a deep discount, so they can turn around and open their own “shoe store,” reselling the shoes at a modest profit.

With the go-ahead from his parents, Jackson contacted Soles4Souls and told them he was going to collect 25,000 pairs of shoes for them before the end of 2017. Why such a steep goal? The reward is that Jackson would get a free trip for two to visit one of the Soles4Souls program sites, in person.

“Jackson is the youngest person in Arizona to host a shoe drive with a goal of 25,000 pairs of shoes,” said Kelly Modena, director of Donor Services for Soles4Souls. “We have had several young philanthropists around his age collect shoes, but no one in Arizona. We’re really excited to see how the Phoenix area responds to Jackson’s drive.”

The family contacted Phoenix-area Orangetheory fitness center owners to see if they would serve as drop-off points, and all were excited to participate. Collection boxes currently are available at the 7th Street and Glendale Avenue, and the 19th Street and Highland Avenue locations. Jackson and his mom or dad empty the box at each location at least two to three times a week. “They are more full on the weekends,” Jackson says.

So far, Jackson has collected more than 2,000 pairs of donated shoes—and was starting to have problems as to where to store them for the duration of the drive.

Luckily, a local business executive has donated warehouse space in the Scottsdale Airpark area, and other donors have stepped forward with a couple of storage “pods” that Jackson can use. The extra benefit is that, once filled, the pods can be loaded and shipped directly to the Soles4Souls corporate headquarters in Tennessee.

Jackson and his family are now preparing to ramp up the donation drive. A collection day has been set for 12-4 p.m. Sunday, March 26 at the Sriro home, located at 311 E. Maryland Ave. Look for the open garage and the donation signs.

Shoes of all types and sizes are needed, including children’s shoes, women’s dress shoes, sandals, men’s athletic shoes, etc. They need to be in still-wearable condition. Also needed are the large, black lawn-and-leaf trash bags to line the donation boxes, so that they bags can simply be removed and replaced.

“I’m hoping people can donate what they can, and also tell their friends to donate, because this is going to take more than just you and me in order to make a difference,” Jackson says.

“The simple truth is that almost anyone with a closet has shoes they don’t wear, or an old pair that will just end up in a landfill,” said Jackson’s father, Todd Sriro.  “Give those to us, and know that you are taking a step to making the world a better place for all of us.”