By Teri Carnicelli
Hunter loves going to work every day with his fellow officers of the Phoenix Police Department Bomb Squad. But his service is coming to an early end, unexpectedly, due to some serious health issues. And both his police family and his handler family are rallying together to make sure that whatever time he has left is surrounded by love. 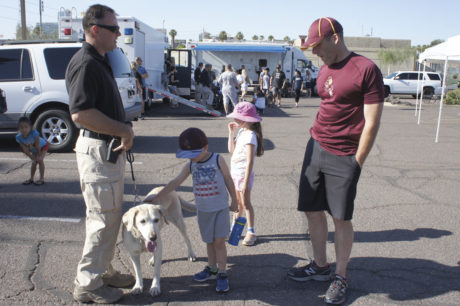 Hunter, a yellow Labrador retriever, is a highly trained Explosive Ordnance Dog (EOD) for the Phoenix Police Bomb Squad. His handler since the beginning of his service has been Det. Keith Crouse, who has been an officer for 24 years and with the bomb squad for 13 years. Hunter is his first K-9 partner.

EOD K-9s are used on almost every call the bomb squad responds to. An officer within the specialty unit says they respond to an average of 400-plus calls a year. That’s more than one a day. But the public generally doesn’t hear about it because they stay off radios and police scanners in case a potential explosive device may have a radio trigger. Plus, they don’t need the public showing up to an active site as spectators.

Most of the time, the calls turn out to be false alarms.

Hunter’s job, like his two fellow K-9 officers, is to go into a potentially dangerous situation and either clear the scene, or alert as to where, specifically, bomb-making materials might be located. The K-9 will go in ahead of their human officers as an extra layer of protection.

“There is a strong bond with the officer handler, but the dog is a tool, it is a working dog, and God forbid something should happen, it does protect the other officers from potential harm,” said Timothy Thomas, president of the Phoenix Police Foundation. For that reason, these dogs play a critical function with the bomb squad.

So with Hunter’s recent diagnosis of kidney failure, his handler is working to make him a permanent part of the family, even though Crouse and his wife, Jill, know they will be facing some hefty medical bills.

Keith explains that with Hunter’s kidney failure, there really isn’t a cure. They can manage the symptoms, to an extent, through diet and medication to help with side effects like nausea.

“Some days he’s great, some days he throws up every time he eats,” admits Jill, who refers to herself as “Hunter’s mama.” “He’ll require regular blood tests, special prescription food, and regular medication,” which could get very costly four the couple.

The Crouses are in the process of transferring ownership of Hunter from the Phoenix Police Department to themselves, which basically is a document that transfers liability so the city is no longer legally responsible for him. The anticipated cost of the transfer is $1—it’s more of a formality than anything.

However, Hunter is just over 8 years old, and the expected term of his service wasn’t anticipated to end for a few more years yet. Which leaves the city in something of a lurch, as it has not yet begun to save and budget for a new EOD dog.

So the Phoenix Police Foundation has stepped in to both help pay for Hunter’s medical costs, and to raise funds to purchase a new specially trained K-9 to replace him. Because of that specialized training, these dogs can cost upwards of $13,000.

The Phoenix Police Foundation held a fundraising event on June 17 at Hance Dog Park. Hunter and the Crouses made and appearance, as did several members of the bomb squad, their response vehicles, and a couple of the robots they send in to examine—and in some cases, explode—suspicious packages.

Several local businesses donated items for a silent auction, including Doggy Daze, a grooming and pet supply store at 7th Street and Missouri Ave. Owner Sean Kirk donated 15 drawstring backpacks with pet food samples, which were given out to those who made a minimum $20 donation. Kirk also donated four $20 gift cards for raffle prizes, and some Blue Wilderness dog food chubs.

Other donors include AMC Theatres, the Arizona Diamondbacks, and the Crescent Ballroom.

The Phoenix Police Foundation is continuing to collect donations on behalf of Hunter and for a new K-9 for the bomb squad. Donations can be made online at www.phxpolicefoundation.org/k-9-fundraiser.html. Donations also can be made in person at Doggy Daze, 5555 N. 7th St., Ste. 126, during regular business hours.