By Teri Carnicelli
It started with the idea of bringing some color and excitement to the otherwise bland lobby of the Washington Activity Center.

Pam Fitzgerald of the Washington Park Neighborhood Association explains that her association holds its regular meetings at the center, 2240 W. Citrus Way, and she couldn’t help but wonder if there was a way to make the lobby visually a little more appealing. 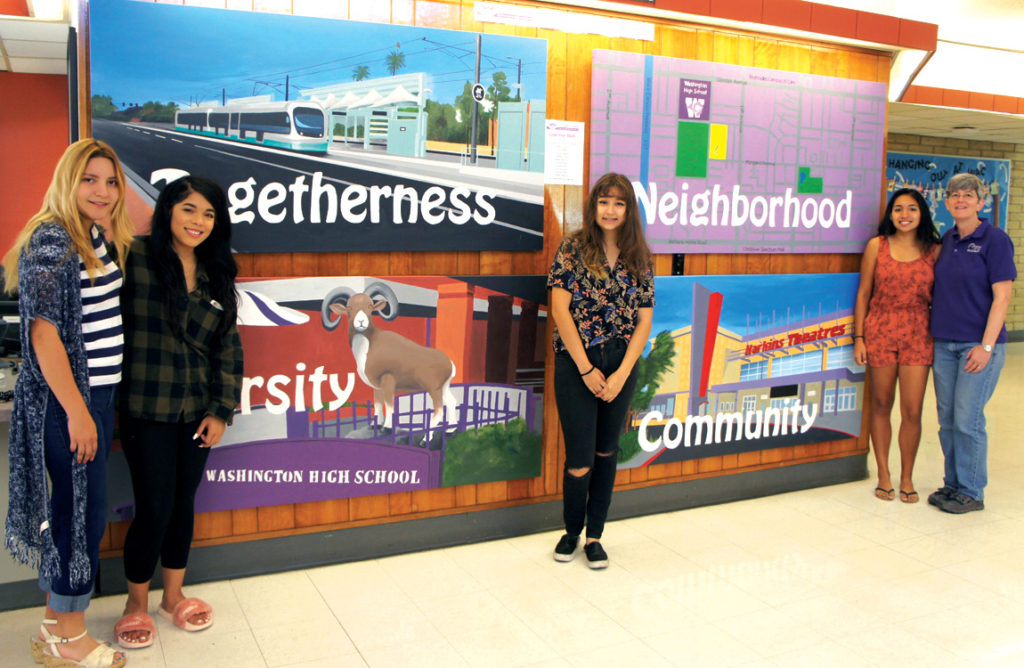 The new mini-murals inside the Washington Activity Center were created through a partnership with the Washington Park Neighborhood Association, the city of Phoenix’s Love Your Block mini-grant program, and art students from Washington High School, including, from left: Gina Cordova, Jasmine Dueñas, Aileen Villarreal and Natalie Delgado, under the supervision of teacher Karen Bell-Zinn (photo by Teri Carnicelli).

“It was just so boring,” she said. Then her association received some information about the city of Phoenix’s Love My Block mini-grant program, and an idea began to take shape.

Fitzgerald approached Karen Bell-Zinn, Visual Art Department chair and AP Art teacher at Washington High School, about possibly doing a mural for the lobby. Fitzgerald’s first though was to work with the high school, since she and her siblings were graduates from there, her son was once assistant principal of the school, and her daughter did her student teaching there.

Bell-Zinn said a mural would be too complicated, requiring the students to travel back and forth between school and the center. So they brainstormed and came up with the idea of mini-murals that would serve as “roving billboards”—art that could travel around to other locations to be on display.

The $1,000 grant was applied for by the neighborhood association and received in February, but students weren’t really able to start on the project until later in the spring. In fact, most of the work was completed in less than three weeks, as the students had their own final art projects to finish before the end of the school year. Many came in before and after school to work on the mobile murals.

Bell-Zinn said her students worked together to come up with both the words that reflected the idea of “community,” as well as images that could go along with each word. “Togetherness” features an image of the light rail train; “Diversity” shows the ram mascot in front of Washington High School; “Community” depicts the nearby Harkins Theatres at Chris-Town Spectrum Mall; “Neighborhood” is an actual map of the area encompassing the Washington Park Neighborhood Association; “Love” has been partnered with the tennis courts at the Washington Activity Center; “Hope” depicts a family walking on the grass near the monument sign for the center; “Family” is a colorful picture of a nearby playground; and “Unity” show the front of Maryland Elementary School.

The “roving billboards” were unveiled during a special reception on May 20 at the Washington Adult Center. Doughnuts for the event were donated by Fry’s grocery store and coffee was contributed by Scooter’s Coffee.

The mini-murals will decorate the lobby at the Washington Activity Center for the next couple of months, but the idea is eventually to send them around (all together or in segments) to other areas of the community, such as the lobby of the Abrazo Central Campus (formerly Phoenix Baptist Hospital), the Chris-Town YMCA, the Yucca Library, and perhaps even Harkins Theatre.