By Teri Carnicelli
Should they stay, or will they go?

That’s what many of the tenants at Park Central Mall are asking themselves after it was announced last month that the property at Central Avenue and Earll Drive had been sold and was slated for a major redevelopment. 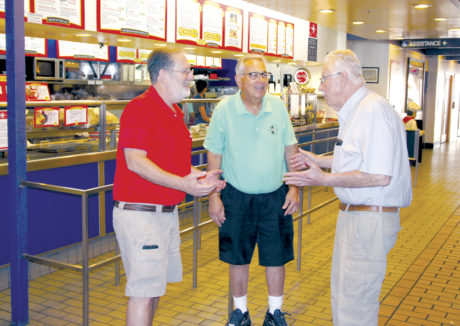 Charlie Sands, left, and Jim Bickoff, center, owners of the Park Central Deli, console longtime customer Jerry Folz, who is saddened by the news that the deli—first opened in 1957—will be closing for good on Nov. 17 (photo by Teri Carnicelli).

And for at least one longtime business there, the writing was on the wall: it’s time to say goodbye.

Miracle Mile Deli, operated by the Grodzinsky family, was one of the very first tenants when the mall opened in 1957. In 2005, the family sold it to business partners Charlie Sands and Jim Bickoff, who renamed it Park Central Deli. And now, the long-running establishment will see its final day on Friday, Nov. 17.

Sands opened the Green Woodpecker at Park Central Mall in 1975, and sold the business in 2007. He ate breakfast and lunch practically every day at the deli next door, so when he heard it was for sale, he talked his longtime friend, Jim Bickoff, into buying it with him. Bickoff was no stranger to the deli business, having owned Bickoff’s Deli and J.B. Motley’s, and at the time was the owner of the Downtown Deli, which he ultimately sold in 2010.

Sands explained that he knows what it’s like to go through major construction issues, because the business did take a hit during the construction of the light rail route along Central Avenue. With redevelopment now slated for the mall itself, Sands and Bickoff say its something they just don’t want to go through again. And with their lease being up next year, they decided to close up shop before the major work begins.

Two Arizona-based commercial real estate firms—Plaza Companies and Holualoa Companies—teamed up to purchase a significant portion of Park Central Mall. Plaza and Holualoa now control more than 337,000 square feet of buildings at the site. The overall price of the purchase and expected renovations is approximately $57 million, and construction work will begin on the transformation effort in the coming weeks.

The new ownership group is working with architect richärd+bauer and DPR Construction to reinvent Park Central by converting it into a modern, mixed-use center that recaptures some of the midcentury modern architecture that currently exists. The new look, along with extensive renderings and the new project site plan, can be viewed on the project’s website, www.parkcentralphoenix.com.

Sharon Harper, President & CEO of Plaza Companies, said the “reinvention” of Park Central can be done within existing zoning, and the new ownership group does not anticipate adding additional height or density. Instead, their goal will be to revitalize existing buildings, take advantage of their high ceilings, and create outdoor shaded spaces, contemporary exterior surfaces, and collaborative work areas.

“The history of Park Central is very compelling, and this is an exceptional opportunity to respect the history and the incredible location while repositioning to attract a creative workforce,” Harper said.

But what does that mean for businesses that already are housed at Park Central Mall? According to Tom Evans, a spokesman for the new ownership and development team, occupied tenant spaces will be negotiated on a case-by-case basis.

“We are in talks with everyone right now,” Evans said. “Some may decide to relocate to different portions of the project based on the new layout. Some will likely decide they need to move,” as they anticipate a hike in rent.

One of those businesses contemplating its future at Park Central Mall is Fired Pie, a fast-casual eatery where you can build your own salads and pizza combinations. Fred Morgan, one of Fired Pie’s three founders, said they met with the new ownership of the mall, and while he likes the new design, he has some concerns.

“Our lease comes up in July and we are in negotiations with the new landlords, who have made it clear that rents will go up,” Morgan said. “We haven’t been told yet to what degree they will rise; so I don’t know at this point if we will stay. We make a nice profit, but they plan to bring in three new restaurants, which could be full-service, and on the outside facing Central Avenue.

“It’s an area we like, and we’d love to stay there,” Morgan said. “But we also have to look out for our business.”

As for Sands and Bickoff, who are both in their late 60s, the idea of trying to sell the business in advance of a major remodel didn’t seem viable. Instead, it seemed like a good idea to retire.

Sands said there are no special plans for Nov. 17, that it will be “regular service, just like any other day.” But he can’t anticipate what kind crowd he might get, of well-wishers and longtime customers, friends and family.

Longtime customer Jerry Folz was nothing short of devastated by the news. He has been going to the deli for lunch since back when it was still Miracle Mile. He makes the commute from his furniture store on Jackson Street in downtown Phoenix, every weekday. “I don’t know what I’m going to do when this place closes,” he said.

“It’s been great,” Sands said. “I’d like to think Jim and I made a difference here. But it’s just time.”