By Teri Carnicelli
More than 60 residents and neighborhood representatives turned out for a meeting last month hosted by Phoenix City Council members Debra Stark and Daniel Valenzuela to present information on how the city of Phoenix and Valley Metro plan to address safety and security issues on the light rail trains and platforms along 19th Avenue. 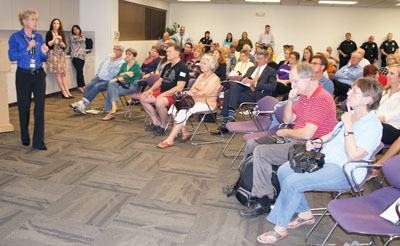 Adrian Ruiz, director of Safety and Security for Valley Metro (far left), speaks to a group of more than 60 residents about plans to address crime and safety issues on and near the light rail from Dunlap Avenue south, during a community meeting held on March 9 (photo by Teri Carnicelli).

Since the Dunlap Avenue station and park-and-ride lot opened in March 2016, the city and Valley Metro have received numerous complaints from residents and nearby businesses about transients loitering on and around their property, increased crime activity, piles of trash being left around, and other “nuisance” complaints.

Perhaps the largest number of complaints has come from the Royal Palm Neighborhood Council, which encompasses the area from Dunlap to Northern avenues and 19th to 7th avenues.

“I pushed diligently for the northwest light rail extension on 19th Avenue and we were able to accomplish it seven years early,” said Councilman Valenzuela, who represents Dist. 5. “But it is still relatively new, and we have to work on these issues—first and foremost, that it is a safe community for all.” Much of the light rail route from Montebello to Dunlap avenues falls within his district.

While the city of Phoenix Public Transit Department operates the majority of the city’s bus services under the Valley Metro name, it is actually Valley Metro itself that operates the light rail train. “It is very much a shared partnership, and it is very important to us make sure we are hearing what you need and that we are addressing those issues,” said Maria Hyatt, director of the Public Transit Department.

Hyatt pointed out that when voters passed the Transit 2000 tax, it included funding for a Transit Enforcement Unit (TEU). Before that, there had been no designated funding for transit security within the Phoenix Police Department. The more recently Transit 2050 tax extension created additional funding for the TEU as well as security administered by Valley Metro transit officers.

Currently the TEU includes a total of 16 sworn police officers, three K-9 units, 23 police assistants (light blue shirts), and 24 municipal security guards (white shirts, with Valley Metro). The TEU works off of its own radio channel, so transit-related issues—whether bus or light rail train—go directly to the specialty unit. However, the closest police precinct also gets the call, to ensure that whoever is closest can get there soonest.

The white-shirted security officers with Valley Metro are tasked with fare regulations and rule enforcement on board the trains, but they have no authority to arrest or forcibly detain.

The TEU launched a crime suppression pilot program from September to December last year, specifically targeting crime along 19th Avenue. According to Lt. Seth Jahnke of the TEU, in that period of time, there were 149 arrests made, 177 incident reports, 92 field interrogations, and 44 citations.

On Feb. 1, the 19th Avenue Corridor Extra Duty Program was launched in Phoenix, thanks to funding from the Transit 2050 tax extension. It allows Valley Metro to hire off-duty police officers to patrol the platforms and trains. Right now it funds four police officers (two teams of two officers), working 4-5 days a week, for 5-6 hours a day.

Adrian Ruiz, director of Safety and Security for Valley Metro pointed out the trains and stations do have their own security features, including video cameras and emergency call buttons and boxes.

“We want to help with the issues in this community and we are going to strengthen the police presence, as well as enhance the platform and park-and-ride security at the Dunlap Station,” she said.

There also has been a noticeable uptick in jaywalkers crossing 19th Avenue, generally between Northern and Dunlap avenues. In fact, one city official admitted that this stretch of the light rail route has the highest number of reported jaywalkers than any other section of the 26-mile light rail line.

In November last year, a man was killed and his 12-year-old son critically injured as they crossed Northern Avenue, near the light rail track and against the red light, after they were struck by a car heading north on 19th Avenue in the early afternoon.

Ruiz said that Valley Metro plans to post additional signage along this stretch of the light rail route, not only alerting pedestrians to not cross mid-block and not walk over the tracks, but also by working with the police department, making it an official “no trespassing” zone so that instead of jaywalking, pedestrians can be ticketed or even arrested for trespassing on the light rail tracks.

She encouraged members of the community with additional suggestions—or complaints—to contact Valley Metro’s customer service line at 602-253-5000 or e-mail them to csr@valleymetro.org.