Home / Cafe Chat / A taste of France in central Phoenix

A taste of France in central Phoenix

By Patty Talahongva
There’s a lot packed under the roof of the French Grocery, 5345 N. 7th Ave., and it all reflects the origins of the owners, Kevin and Erin Lentz. She grew up a mile away and he spent his formative years in New Orleans.

Four years ago they decided to move from New Orleans to the North Central community and raise their girls around family and also start a business. 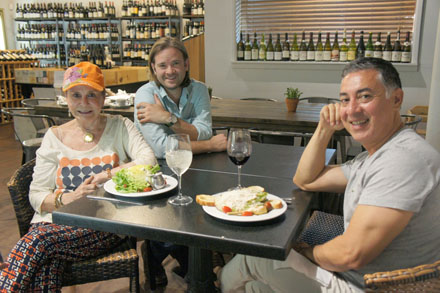 Kevin Lentz, owner of French Grocery (center), visits with regular customer Virginia Foster and her guest, Trino Sandoval, who are both instructors at Phoenix College. Foster is enjoying the Wedge Salad and Sandoval tried out the Grilled Artichoke Cesar Salad (photo by Teri Carnicelli).

The site was originally a Circle K store and still had the wall of refrigerated shelves. Making use of that space, Lentz stocked it with dozens of French wines. Large cold cases hold a variety of French cheeses and the shelves are stocked with crackers, jams and other items one would find in a corner store in France.

“It very organically grew,” he says. Pre-made dinners were kept in the coolers but customers would often ask to have them warmed so they could eat at one of the few tables provided. It made Lentz think. “We began to find that a lot of our customers wanted to dine here,” Lentz recalls. So they added more tables and created a more diverse menu for breakfast, lunch and dinner.

Lentz describes his place as having French influences but it’s still an American restaurant.

The breakfast shift is managed by his sister-in-law, Melissa Pickering. Breakfast is served until 11 a.m. and features French favorites such as chocolate croissants or ham and cheese croissants, quiche, omelets and fruit salad. Breakfast items range from $3 to $6. You can get tea or enjoy a French press coffee, espresso, latte or cappuccino.

Lunch has a much larger menu, mostly sandwiches, and is served 11 a.m. until 3 p.m. You can get a soup de jour or a salad. Worth trying is the truffle burger with frites, Croque Monsieur or a fried shrimp Po’Boy. The club sandwich is served on a beignet. Sandwiches range in price from $6 to $12.

Dinner is served 5 to 9 p.m. and features small plates you can share or large plates if you’re really hungry. Soup, salad and a fromage & charcuterie plate also are offered. Foie gras is a must try and the shrimp etouffee is delicious. Another French favorite is the fried langoustines. The beef filet Mignon is the most expensive dish at $29.

Summertime is a good time to experiment with the menu, Lentz says. But Lentz knows better than to mess with some dishes. “I’d be in a lot of trouble if I took shrimp etouffee off the menu,” he acknowledges. Duck breast and duck comfit also are very popular.

He loves to cook and is often helping prep the food alongside sous chef Gabe Goldson. “We kind of have an unspoken ballet in this very tiny little space,” he gestures to the compact kitchen. His wife, Erin, helps out with the baking and the marketing.

Customers can order cases of wine or wedges of fromage. “I will sell any French cheese I can get my hands on,” he says, and he also will special order cheese for customers if they order a large quantity.

Lentz says most new customers typically are led to him via social media and by searching for a wine bar. He has a fair amount of people who drive from other parts of the Valley and even snowbirds during the winter who come to enjoy this mix of French and French Creole food.

He points to several customers he says are regulars, “I see them a lot,” he smiles and waves at the couples.

Last summer he started hosting a wine segment on YouTube. “It wasn’t my idea,” he laughs. A customer suggested the idea and even offered to shoot, edit and post the videos. They have become quite popular with people sending him questions about wine. They also can be found on the French Grocery Facebook page.

“I do not discriminate,” he says when asked if he prefers red or white wines. “There’s a wine for every occasion.” Customers also can purchase a bottle of wine and drink it with their dinner on site. There is a $10 corkage fee.

Wine ranges from $7 a bottle and up. He also sells wine in a box for $20 and it holds approximately four bottles of wine. The air-tight bag helps keep the wine good for several weeks. “We don’t have plonk wine,” he says. There is, however, a selection of vegan wine.

Today French Grocery has more tables for diners—though seating is still limited and reservations are definitely recommended. The comfy atmosphere, he says, is intentional. Seated beside a wall of wine and cases of cheese, you can also smell the aroma of fresh baked bread made daily.

“We love serving people,” Lentz says. “I wake up thinking about food, feeding my family.” It pleases him to host so many anniversary and birthday dinners.

“People like a nice place to celebrate,” he smiles.

As in France, people are able to eat, drink and enjoy for hours. “No one is going to be chased away,” he says. “People want to pretend they’re in France.”

The French Grocery is open Tuesday through Friday 7 a.m. to 10 p.m., and Saturday 8 a.m. to 10 p.m. The kitchen closes at 9 p.m. Visit the website www.frenchgroceryinc.com to sign up for e-mail alerts or follow them on social media Facebook or Twitter. To make a reservation, call 602-277-0101.