By Patty Talahongva
At the start of each shift at Akai Hana Sushi and Grill (8041 N. Black Canyon Hwy., Suite 112) the chefs sharpen their knives and prepare for a day of sushi, sashimi, teriyaki and tempura. Since 1986, when the restaurant opened as Mr. Sushi, thousands of rolls have been made and served at this location. 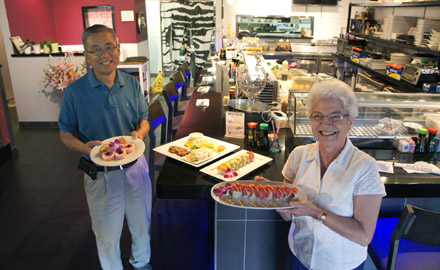 Kazuo Tashiro and his wife Farideh show off an array of sushi offered at their restaurant, Akai Hana Sushi and Grill, including the Aloha wrapped in pink soy paper, Chicken Teriyaki with California Roll, the Rainbow Roll, and the Six Shooter (photo by Teri Carnicelli).

In 2003, Kazuo Tashiro purchased the restaurant and took over, renaming it Akai Hana, which means “red flower.” Tashiro is from the small village of Nagasaki, Japan. He’s worked in the restaurant business his entire life and as a sushi chef for much of that time. America was always his dream destination.

“America is the center of the world,” he says. His grandparents spoke often about the riches to be found in America. “You could grab the gold off the ground in the city,” they would tell him. It was the land of opportunity and he was encouraged to move to the United States.

Still, it was a huge choice for the self-described country boy. He went to college in the big city of Osaka, Japan. “Country boy moved to the big city, wow!” he laughs at the memory. His plan included traveling the world before settling down somewhere, so Tashiro traveled and worked in many countries including Australia and Central and South America. In 1974 he immigrated to the United States.

Tashiro settled in New York and quickly went to work for a sushi restaurant. It wasn’t long before he met Farideh, his future wife. She had spent time in Spain, Germany and Japan doing missionary work. “In the beginning I couldn’t understand his English,” she says. “But I’m polite,” so she says she didn’t question him or correct him. She also wasn’t too keen on sushi. “Who eats raw fish?” she asked herself. Undaunted, Tashiro took her to the sushi restaurant inside the Waldorf Astoria Hotel in New York and ordered for her. “I was hooked,” she says and marveled, “I am going to eat this for the rest of my life? Wow!”

The couple has been married since 1982. Their one son is not in the family business.

After years of braving the New York winters, they decided they wanted some sunshine so they moved to Phoenix in 2003. “We missed the heat,” he says and they both laugh. At first he worked for a friend in the Valley who had a fish distribution company—and one of Tashiro’s delivery stops was at Mr. Sushi.

In 2003 he took over Mr. Sushi and brought his years of culinary experience to Phoenix. He recently expanded the seating area to 125 people, with a full bar.

The lunchtime crowd is mostly business people from nearby offices. Akai Hana offers traditional sushi but also sushi with a Southwestern flair, which includes jalapeños and cilantro.

Hand rolls range in price from $5 to $6.50, sushi averages $4.50 for two pieces unless you order the sea urchin, which is $10 or the toro, which is $12. Sashimi averages $10 for five pieces. There is a large selection of appetizers such as baby squid, edamame, and tempura vegetables.

Happy Hour is daily at different hours; check the website or Facebook  and look for discounted prices on select appetizers, sushi rolls and beverages.

Tashiro likes the wide variety on his menu and says it makes it unique to Phoenix. “If a Japanese chef came today, (he would ask) what is this sushi?” Tashiro laughs.

He wants to bring people happiness, he says. “We try to improve, add new things.” When he visits New York or Las Vegas, he watches for new ideas and trends in the food industry to introduce at his restaurant.

Tashiro also offers etiquette tips for customers. Sushi, he explains, is a finger food. You don’t have to use chopsticks to eat. You can eat sashimi with chopsticks or a fork. “We don’t say no,” he says. “The point is to enjoy.” Akai Hana provides a spoon to eat the brown rice, which is hard to pick up with chopsticks.

At the Phoenix location (there also is a location in Goodyear), there are many regulars who enjoy eating casual dinners at the restaurant but also celebrate milestones such as birthdays, anniversaries or prom. “We see so many families,” he says. “First, second and third generations come together.”

As the country celebrates its Independence Day this month, Kazuo and Farideh Tashiro will also celebrate in America in Phoenix, the land of opportunity. But, he points out, they won’t be eating sushi. Traditional hot dogs off the barbecue most likely will be on the holiday menu at their home.