There are many ways to access the popular Shaw Butte in the North Mountain Preserves, most of them via hiking trails that wind around the area. Only of couple of them, however, take you past the ruins of what was once the hottest—and only—hilltop restaurant in the Valley. 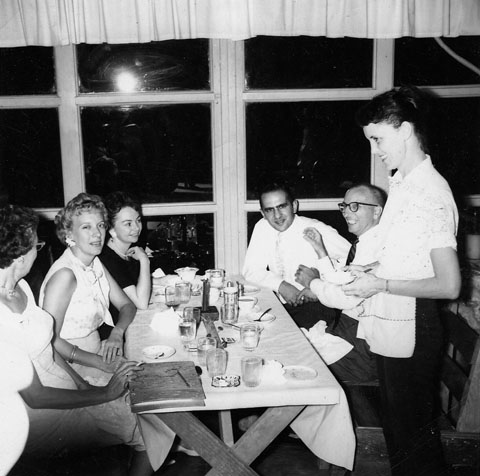 Barbara Barker, standing right, takes customers’ orders at the Cloud 9 Dining Room, built by her husband, Richard, as part of their mountaintop home and opened in January 1961 (photo courtesy of the Barker family).

Richard and Barbara Barker in 1957 acquired 40 acres on the south side of Shaw Butte, and Richard immediately set to cutting the peak off their small hilltop to create a flat surface on which to build a family home. He had a winding driveway cut into the hillside, and a little below the peak carved a wide, curving swath for parking and picnicking.

The house was completed in early 1959 and the family moved in. But Richard, who many thought was somewhat eccentric, always had the idea of a restaurant in the back of his mind because of the sweeping views from their hilltop home. And so he set about closing off the east side of the house and moving the family into the west side.

The Cloud 9 Dining Room had its official opening in January 1961, with Barbara working as one of the waitresses and Richard, wearing his Sunday best, greeting the guests and working the room. Since the winding driveway up was intimidating to most drivers, and the access to the hilltop was closed off to everyone but family, it was Richard who shuttled up customers and staff alike in his Land Rover.

Despite its remote access, the eatery proved popular and a second story was added to the home. Richard had even begun construction on an aerial tramway to get customers up and down in a more convenient manner, when tragedy struck. A fire, whose origins remain a mystery to this day, destroyed the entire structure in November 1964.

One of the Barkers’ sons will present a brief glimpse into the past on the site of his former home and the short-lived restaurant from 9-10 a.m. Saturday, March 18. He will share stories of the construction challenges, some of the welcome—and not-so-welcome—guests, how he and his siblings “worked” the picnic area, and more. The presentation is rain or shine. The best way to access the area is from the northernmost end of 15th Avenue (park on Yucca, Shangri-La, etc.) It is a fairly steep uphill climb but the shortest route.

From the North Mountain Visitor Center, take Trail 100 to where it crosses Trail 306 and follow Trail 306 around the base of Shaw Butte, approximately 2 miles total over uneven terrain.