Paul M. Steingard, D.O., no doubt had an illustrious career in the field of osteopathic medicine. But what most North Central families will remember him for is the creation of a free program that undoubtedly saved the lives of countless Phoenix youth. 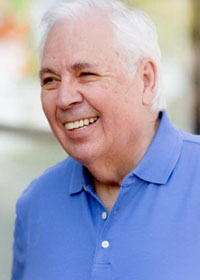 Dr. Steingard, who passed away on Feb. 27 at the age of 88, was a tireless advocate for his patients, family, community, and osteopathic medicine. He opened his family practice in Philadelphia in 1955 and moved to Phoenix in 1962 where he established a private practice.

A staunch advocate for his community, charitable work played a significant role in Dr. Steingard’s life. His volunteerism linked his medical knowledge with a ceaseless passion for progress.

In the early 1960s when a physician shortage left Phoenix schools searching for someone to provide sports team physicals, Dr. Steingard started giving free high school physicals—many of the high school students could not afford a doctor visit. He founded TOPS (Team Osteopathic Physicals for Students) in conjunction with the Arizona Osteopathic Medical Association. For nearly 40 years, he provided free medical checkups for thousands of high school athletes believing that a pre-season sports physical can be a lifesaver.

These free, pre-season screenings were able to detect previously unknown heart or lung conditions for many Valley youth, who might have experienced life-threatening health issues while playing sports had the conditions not been identified in advance. This program continues to provide more than 2,000 free sports exams a year and includes EKGs and ECHOs.

Dr. Steingard was one of three physicians who founded Sports Medicine as a medical specialty in 1969 and he was the first team physician for the Phoenix Suns serving 23 years, later becoming the Team Physician Emeritus. He also served as the team doctor for the Phoenix Roadrunners, the 1984 Kenyan Olympic team, Grand Canyon University, Phoenix College and numerous Phoenix-area high schools.

Dr. Steingard served on the boards of TOPS, the National Football Foundation–Valley of the Sun chapter, the Grand Canyon State Games and Midwestern University. He was the medical advisor for the Phoenix Union and Glendale Union High School Districts and established one of the first Sports Medicine Fellowship programs nationally.

Amongst his family and friends, Dr. Steingard was known for his love of sports, jazz and great food. He was always ready with a recommendation, be it for a good book, an old movie, or if you were traveling to a new city, the best restaurant in town. Dr. Steingard had a voracious appetite for knowledge and a genuine love of learning, which he tirelessly worked to instill in those he knew.