A local nonprofit recently opened a second home specifically for Phoenix veterans working to get back on their feet financially—and emotionally. The home can house up to 9-10 men at a time and is a licensed dehp therapeutic treatment facility, helping provide veterans with the tools to overcome the effects of post-traumatic stress disorder. 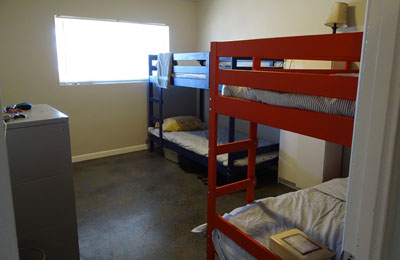 Though somewhat sparse, this shared bedroom at the new Soul Sanctuary Veterans Home is a welcome haven for Phoenix veterans needing transitional housing while they find financial stability and deal with issues such as PTSD (submitted photo).

Soul Sanctuary in the Desert was first established to work with at-risk families to break the generational cycle of substance abuse and domestic violence through its support of women and children. In 2004, Soul Sanctuary opened its first nonprofit housing program for women, allowing mothers and children to have their own bedroom and personal space. It has since branched out to include its nonprofit housing program for veterans.

An open house was held at the second veterans’ home, near 20th Street and Indian School Road, on April 22, as a way to welcome the veterans to their new home and the neighborhood. A local troop of Boy Scouts held an official flag raising ceremony to open the event.

The Veterans Home is a transitional program to help veterans reach financial and emotional stability and return as a productive members of society. The home was made possible due to supporters like Arizona Cardinals wide receiver Larry Fitzgerald, who has been a past supporter of Soul Sanctuary’s transitional housing for women and also contributed to the new Veterans Home.