Helping kids get hands-on in club

Organizers of the Roosevelt School District’s Summer Culinary Club approached Phoenix City Councilwoman Deb Stark to ask her to invite one of her favorite restaurants from her north Phoenix district to do a presentation to the club. 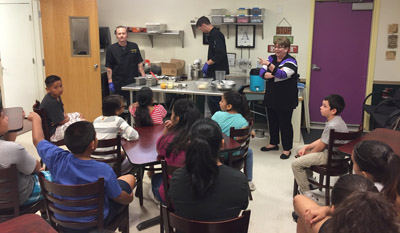 Scramble, located at 9832 N. 7th St., has been a longtime favorite of Stark’s, and owner Don Talbot is someone she considers a close friend.

Stark and Scramble’s Executive Chef Mike Williams and Kitchen Manager Jacob Schlink visited the program on June 14, where the chefs demonstrated how to make the restaurant’s signature Brizzas (breakfast pizza), including making the dough, the hollandaise sauce and various toppings. They also spoke to the students, who were from VH Lassen Elementary School, about what it takes to be a chef, and the benefits of being in the restaurant industry.

According to the National Restaurant Association, one in three Americans get their first job in a restaurant, and half of all American adults have worked in one at some point during their lives.

“The benefits of a program like this are far-reaching,” said Stark. “The food and service industries are such a huge part of the Phoenix landscape, and being able to teach these kids skills that they can possibly use down the road will be a great opportunity for them.”