Phoenix Rotary 100 last month hosted its 87th Annual High School Speech Contest for high school students, with a culminating event held April 7 at the Phoenix Country Club. The event was attended by Phoenix Rotary 100 members as well and family members, speech coaches and other supporters of the upper division student finalists, as well as the winners of the lower division (chosen on April 3) and their families. 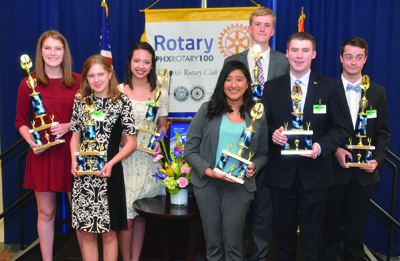 “Besides the scholarship awards the winners will receive, each of these students will be competing before and will be judged by you—an audience of 175 Phoenix community leaders,” said Speech Contest Chair John Adel, prior to kicking off the final round of the contest for the upper division. “The experience gained here will be an invaluable for every one of them.”

Thunderbird High School senior Breanden Nolan captured first place in the upper division (grades 11-12), earning himself a $5,000 scholarship. His topic was “Are there unbiased sources of news?” Among other points, he noted absolute unbiased reporting is not possible, adding that there are differences in the world and people should read multiple sources for news.

Phoenix Rotary 100 President Joe Prewitt praised the speech contestants with a quote from President Theodore Roosevelt in which he stated how important it is to be “in the arena.”

For more information about Phoenix Rotary 100 and its annual speech contest, visit: http://rotary100.org.

Editor’s note: Portions of the above were reprinted with permission from the Rotarizonian.