The Madison Futbol Club (MFC), which offers both Club and Recreational soccer programs for boys and girls ages 8-15, recently wrapped up one of its most impressive seasons with tournaments wins in each age group.

MFC is a central Phoenix league and practices in the area utilizing the Madison School District fields, with “home” games played at Madison Heights. The club competitive teams play August thru April in the Arizona Youth Soccer Association league. They practice twice a week with games on Saturdays throughout the greater Phoenix area. 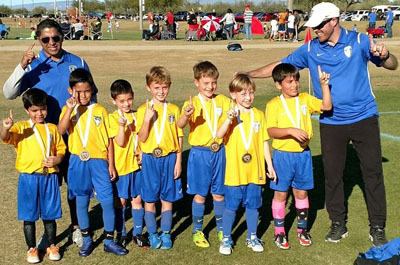 Several of Madison Futbol Club’s boys teams captured first places in tournament play this last season. The club will be holding tryouts for its 2017-18 season this month (submitted photo).

The MFC also attend tournaments throughout the season all over Arizona including Prescott, Flagstaff and Tucson.

All the coaches for the club teams are volunteers and donate their time to help continue to grow both club soccer in Arizona the and MFC league.

For more details about both the club tryouts and rec programs, visit www.madisonfutbol.com. For more information, contact Shawn Grunewald at sgrunewald@cox.net or 602-348-2441.