Water collected to help the homeless

Rising temperatures and unpredictable weather plague the Valley’s homeless and elderly shut-ins each summer in Arizona, causing many to die on the streets and in their homes. According to the Arizona Department of Health Services, more than 1,500 weather-related deaths from exposure to heat have occurred in Arizona since 2000. 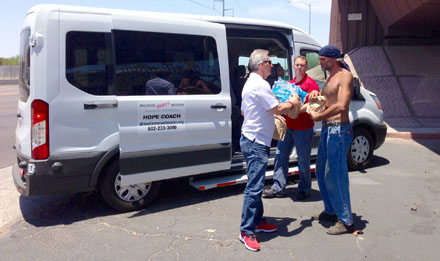 The Phoenix Rescue Mission is in urgent need of volunteer drivers to support its Hope Coach Outreach program. The Hope Coach is a central part of the Code:Red Summer Heat Relief Campaign, as it enables the mission to get the much-needed supplies to those living on the streets. Call Cliff Danley at 602-233-3000 (photo courtesy of Phoenix Rescue Mission).

The city of Phoenix also has initiated its “We’re Cool” heat relief campaign, which offers free bottles of water and indoor locations to cool off, for anyone needing to get out of the heat. North Central locations include the Sunnyslope Senior Center, 802 E. Vogel Ave. (8a.m.-5 p.m. Monday through Friday), and the Beatitudes Campus, 1616 W. Glendale Ave. (7 a.m.-4:40 p.m. Monday through Friday). For a list of all hydration stations around the Valley, visit www.phoenix.gov/heat.

In addition, Ford Motor Company, Big Surf Waterpark and Valley-based Famous Dave’s have teamed up with The Salvation Army to launch the 5th-annual Fill an F150 Bottled Water Drive, taking place through June 11.

Bring in a 24-pack or larger of 16-ounce bottled water to any Ford dealership—including Camelback Ford, 1330 E. Camelback Road—and get a 1/2 off voucher to Big Surf (value of $16.48) and a coupon for a free brisket sandwich at Famous Dave’s. The water donations support The Salvation Army’s Extreme Heat Relief Project, which was launched in 2006 to distribute water and provide respite and safety information to those in need at mobile hydration stations in Metro Phoenix on days with excessive heat warnings.