Three North Central youth were named among this year’s City of Phoenix Outstanding Young Men and Young Women of the Year—and one of them took home the top prize. 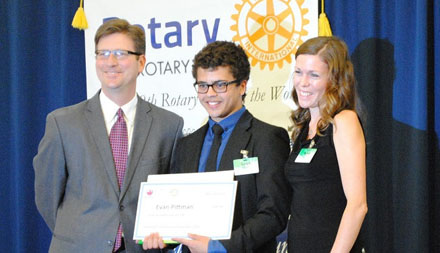 North Central teen Evan Pittman, center, is congratulated on being named the Outstanding Young Man of the Year by Mayor Greg Stanton, and Pittman’s private violin teacher, Sara Off, who recommended him for the honor (submitted photo).

Pittman was named the overall winner for the Young Man Award, receiving an additional $2,000. He was recognized for his extensive record of community service, including his Musical Ministry program and the Lift for Heroes effort that he began in 2015 to benefit combat-wounded veterans.

The program recognizes and honors the outstanding achievements of young people, enhances the perception of youth and raises community awareness of the positive contributions of youth.

All the winners were honored at an awards luncheon on held April 27. District winners also will have an opportunity to participate in citywide programs and special appearances to promote youth issues.