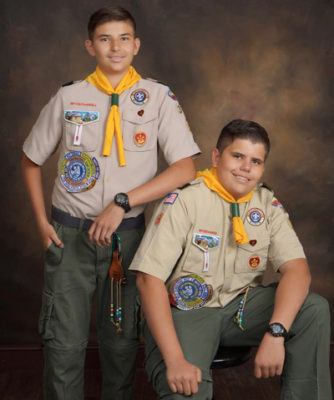 Twin brothers, Jan and Alan K. Hernandez, achieved their Eagle Scout ranks in April and May of this year, respectively.

Jan and Alan, who live in North Central Phoenix, are members of Troop 329 that meets on Wednesdays at 7 p.m. at Madison Meadows Middle School. They are both Order of the Arrow Brotherhood members, the Honor Society of the Boy Scouts of America.

Their Eagle projects benefited the Rio Salado Audubon Center at 3131 S. Central Ave. They each contributed to the restoration of the Visitor’s Center gardens by removing invasive plants and replacing them with native desert flowers and bushes that attract butterflies, bees and other native species.