By Teri Carnicelli
North Central resident Lon Myers knows his “Shaving Private Ryan” campaign sounds humorous, but the purpose of it is serious: if you buy one of his shaving kits, he will donate one for free, in your name, to someone on active duty in the United States Armed Forces, wherever he or she may be serving. 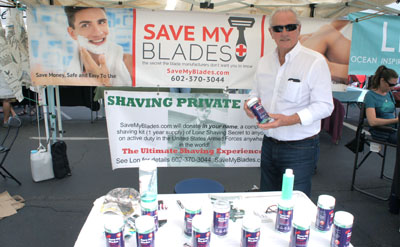 Lon Myers of Save my Blades will donate one of his shaving kits to an active duty service member, for every one purchased. He can be found Wednesdays from 9 a.m.-1 p.m. at the Uptown Farmers Market, 5757 N. Central Ave. (photo by Teri Carnicelli).

And let’s face it—a dull razor blade is nothing to laugh about.

Myers, who has lived in the community for more than 50 years and is an Army veteran, several years ago worked for a well-known national health and beauty products company. He used to receive free samples of their products, and liked to experiment with them in different uses than what they were made for. One day he discovered that one of the products, when diluted and mixed just the right way, kept the razor blade on his manual shaver clean and sharp not just for a week or two, but months and months … and months.

Myers now sells his “Save My Blade” shaving kits locally, but also has a strong following around the country and even internationally, especially among military service members. Women in particular really appreciate his product, as disposable razors for women generally cost more than men’s blades.

“I only go through maybe two blades a year,” Myers says, explaining that “a new disposable razor has a coating on it and so your first shave is super clean and near perfect. But after 2-3 uses that coating is gone and pretty soon the blade starts to oxidize.”

By keeping the blade portion of the razor dipped inside the solution when not in use, the blade stays clean and doesn’t oxidize or otherwise lose its like-new sharpness. The shaving kit itself sells for $25 a kit and is good for at least a year. It comes with a bottle of solution and a sealable round container to keep the full razor in. Given how expensive razors and their cartridge refills can get, it’s a cost-savings that anyone who shaves can appreciate.

If you don’t know someone who is on active duty that Myers can send the free kit to, he is compiling a list of names from local military support organizations. The “Shaving Private Ryan” campaign is ongoing. For more information, stop by his Save My Blade booth, e-mail him at calshideout@yahoo.com, or call 602-370-3044.