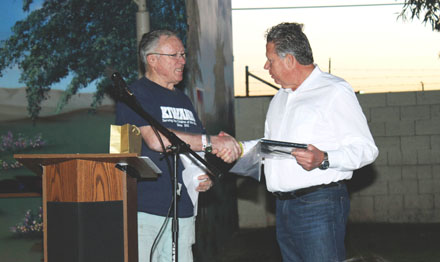 Shaw, a Rhodesian Ridgeback mix, is old enough to have mellow moments but still young enough to enjoy a trip to the dog park for a game of fetch (submitted photo).

Mike Pendergraft, president and CEO of American Valet, was honored last month by the North Phoenix Kiwanis Club for Outstanding Service, recognizing his efforts to positively promote and support the local community. Pendergraft has operated American Valet in the Sunnyslope area since 1980 and now employs more than 600 people in 80 locations.

Born and raised in Arizona, Pendergraft is a third-generation Phoenician. During high school, he worked for US Valet as a valet attendant at local establishments: Green Gables Restaurant, The Pointe Resorts, The Safari Restaurant and Etienne’s. By 1978 he managed the company. In early 1980, Pendergraft started American Valet with the Phoenix Country Club as his first account, opening his office in Sunnyslope, where they are still headquartered today.

The award was presented to Pendergraft on April 28 during the Kiwanis’ annual Dinner in the Desert, hosted by VALLEYLIFE, a fundraising event for the Kiwanis as well Andy Hull’s Sunshine Foundation and The Sunshine Angels.