By Alison Bailin Batz
From a very young age, Andrea Tazioli was fascinated by law—albeit via shows like Murder, She Wrote. But it wasn’t until the turning point in her life that she learned firsthand how to fight tenaciously toward her goals, no matter what.

In 1987, 10-year-old Tazioli made up an excuse to stay home from school. “While fine, I knew my mother had a doctor’s appointment that day—and something was wrong,” Tazioli recalls. “That day, my mom came home with news; she was diagnosed with breast cancer, and given six months to live.” 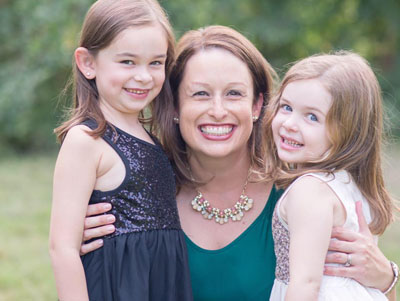 North Central resident Andrea Tazioli, a partner at law firm Quarles & Brady, hopes to pass along to her daughters—Nora, 6, and Molly, 4—the fighting spirit and sense of “do for others” that she learned from her own mother (submitted photo).

Undeterred, Tazioli’s mother drove from their home in Bakersfield, Calif., to USC Medical Center—four hours round trip—over the next 16 years for treatment. She neither gave up nor made excuses one time, even when the disease moved into her bones, her lungs, and lymph nodes. By her side the entire time, Tazioli chose Loyola Marymount for her undergraduate studies as the school was 30 minutes from USC.

“I lost my mom when I was 23, but her fighting spirit is always with me,” said Tazioli, who served as president of her sorority before attending graduate school and law school at night while working a full-time job.

During this time, she earned the Pro Bono Pledge Award for her hundreds of law-related community service hours and the CALI Excellence Award in Family Law, which is given to the highest-scoring student in each law school class, and also got married, with eyes to herself become a mom just like hers in the future.

Tazioli and her husband, Matt Smith, moved to the North Central neighborhood that they now call home in March 2013 (after initially coming to Arizona in 2008), when she was a fourth-year associate at Quarles & Brady.

Tazioli quickly became a familiar face with the Volunteer’s Lawyer Program, Lodestar Day Resource Center, and the President Obama’s Clemency Project, an initiative to commute the sentences of nonviolent offenders.

Along the way, Tazioli herself was named a partner at Quarles & Brady—and became the mom of two daughters herself.

“My girls may never have had the chance to meet their grandma in person, but I teach them every day through both words and actions to fight for the things they care about as hard as she did for us,” said Tazioli. Tazioli chose to enroll her daughters at St. Francis Xavier School, largely because the school’s Jesuit tenant of “kids for others” is an ideal that her mom taught her, even at a young age.

Focused on putting her money where her mouth is, Tazioli is today a volunteer with the Quarles Cares Capitol School project, and also a member of Suns Charities 88, a young leadership program focused on helping raise funds and volunteer time to more than 100 causes across Arizona.

“But most importantly, I serve as a homeroom mom for my girls, and even on their own school fundraising committee,” said Tazioli, whose mom is definitely smiling on her beautiful family this Mother’s Day … and always.