Maggiore is living the American Dream

By Patty Talahongva
Forty years of business is a lot to celebrate, and Tomaso Maggiore is making sure as many people as possible will help him celebrate his famed restaurant, which carries his name, for an entire year.

From Sept. 2016 through Sept. 2017, Tomaso’s at 3225 E. Camelback Road will offer a special “throwback menu” on Mondays. Maggiore is the owner and executive chef, but who doesn’t know that? Guests often see him as he greets them at their tables or checks on their food and they wait to say goodbye as they pay and leave. He’s created an atmosphere that is both fancy and fun. “If you can’t tell, I love food and I love my customers,” he says. 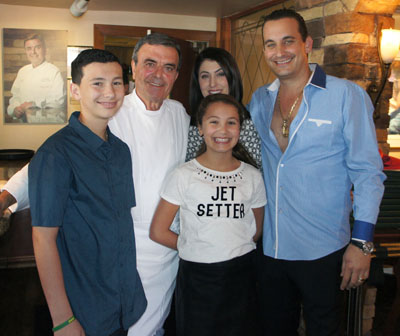 Phoenix Mayor Greg Stanton declared Sept. 29 to be “Tomaso’s Day,” in honor of restaurateur and chef Tomaso Maggiore, whose family came to celebrate the special day with him. Clockwise from left are: grandson Tomaso Maggiore, and his namesake; daughter-in-law Christina Maggiore, son Joey, and granddaughter Melina Maggiore (photo by Teri Carnicelli).

Even Phoenix Mayor Greg Stanton and Councilman Sal DiCiccio were on hand to cut the ribbon to kick off the 40th anniversary celebration. In fact, Sept. 29 was proclaimed as “Tomaso’s Day” in the city of Phoenix. That truly touched Maggiore.

“I got a little choked up,” he says and admits to shedding a few tears in realizing his business has been successful for four decades.

His story is the American dream come to life. He was born and raised in Sicily, Italy. His family made wine and opened a restaurant that served food until the wine was gone, and then they closed for the season. His mother was the cook to top all cooks.

“She could make a shoe sole taste good,” he boasts. Her influence can be tasted in his food.

Maggiore came to America as a young man. He first owned and operated a restaurant in New York for four years. One customer kept encouraging him to visit Arizona. Maggiore took him up on his offer and left New York, buried in a snowy winter, and stepped off the plane in Phoenix in the middle of January to nothing but rays of sunshine. “It was love at first sight,” he laughs.

He looked around for a place to open a restaurant and selected the corner of 32nd Street and Camelback. “People said it was the place to be,” he recalls. Although it was just east of the Biltmore area, it was a little remote at that time.

He started his restaurant near the center of the mall and slowly expanded north as businesses left, taking over the space. Next door he opened a more casual restaurant called Tommy V’s, which connects to the main restaurant and shares kitchen access in the back.

He returns to Italy two or three times a year to visit family and eat at his two favorite restaurants, Don Ciccio, a very old and established restaurant in Sicily going back six generations, and Franco Pescatore.

His two children have followed in his footsteps. He gave his daughter and her husband a restaurant in Carlsbad, Calif., as a wedding gift. His son owns his own restaurant, Hash Kitchen, in Scottsdale.

He stays in shape by walking 5 to 6 miles every morning before he heads to work, where he eats his meals. He won’t name a favorite dish because he says it’s like naming your favorite child.

Maggiore has served nearly 2 million people, provided more than 9,000 jobs and has made 292,000 meatballs. So it makes sense to have a year-long celebration.

Every Monday through Sept. 2017, guests can dine from a menu from 40 years ago with prices from 40 years ago. This throwback Tomaso’s menu will feature items that debuted with the original restaurant. Spaghetti and meatballs will be $12, Eggplant Torte and Butternut Squash Ravioli will be $16, and the Medallion of Veal Tenderloin A la Sorrentina will be just $18.

Of course he has a full wine list and bar. He jokes, “Wine has one fault. All of it should be red.” In 2002 he went into the wine business, growing his own grapes and making his own wine. He also has his own line of olive oil. He uses both in his restaurant and he sells the olive oil to customers.

Rome is never far from his mind and when the 6.2 earthquake hit the nearby town of Amatrice in August, Maggiore knew he had to send help. So he’s dedicated a portion of the proceeds from his dish, Bucatini All Amatriciana. It’s a crispy pork jowl cooked with fresh tomatoes and pecorino cheese served over pasta and it’s a dish the town of Amatrice made famous.