By Patty Talahongva
A woman’s longtime dream is now realized as a vibrant restaurant near the corner of 12th Street and Glendale Avenue. Escobar opened in the hot month of July and it’s become a hot spot in the neighborhood, much to the happiness of Obdulia Coffey, owner and instigator.

“People say they like us,” she beams, with the knowledge that years of hard work, savings and a firm belief have paid off. 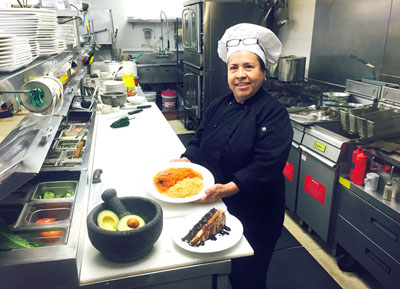 Obdulia Coffey, owner of Escobar, holds a platter of Chile Relleños made with poblano chiles stuffed with panela cheese. Her Chocoflan dessert is quite popular and not too sweet. In front is a molcajete, which is used to make every fresh serving of guacamole (photo by Patty Talahongva).

When she arrived in Phoenix from Mexico City at the age of 38, she didn’t speak English, yet she learned, worked hard, saved and raised her children with the idea of one day owning their own true Mexican food restaurant. “I love to cook,” she says. But when she came to Arizona, the Mexican food here didn’t resemble what she ate in Mexico City. So when she opened Escobar, she reached into her own family recipes to create her menu.

“All the recipes are from my family—my mother, my grandmother. I have it in my head,” she explains. “My son said, ‘You have to write them down.’”

Her family restaurant carries her father’s surname, Escobar. “God gave me this opportunity,” she says of realizing her dream to open a restaurant. She’s happy to have her son and daughter working with her but she also has her favorite role. “I like to cook but I like to be in the front to talk to people,” she says.

You won’t find nachos or sour cream in her restaurant; Coffey says those items are not true Mexican food. But you will find guacamole, a customer favorite. “We sell a lot of guacamole and mole and street tacos. Those dishes are very popular. We have to have them all the time.”

The carnitas also are a big hit. Sides include calabacitas (sautéed squash, onions and peppers), which she says is popular with vegetarians, and black refried beans, which have a little kick to them.

Coffey uses only three types of Mexican cheese: queso fresco, Oaxaca cheese and panela. She is busy every day making the tortillas and the bread for the mini tortas. She laughs at the “mini” size, pointing out that in Mexico her sandwiches would actually be quite large.

Escobar’s prices are very reasonable, with the mole dish selling for $14 and the chilaquiles (served all day) priced at $7. “It’s fresh, good and affordable,” Coffey says. A family of four could eat dinner and expect to spend less than $35. Each item on the kid’s menu is $5.

The one stray item on her menu is the all-American hamburger. “We have one hamburger (on the menu), because we have hamburgers in Mexico,” she says simply. Green and red peppers and mushrooms are added to the Black Angus ground beef. You can even get it with an egg on top. Her son Alejandro tried it and liked it, so they put it on the menu.

Each day the specials are written on a chalkboard and set up outside. Coffey says in the short time Escobar has been open, she already has her regular customers. “I have one guy who comes in every day,” she says—“every day!” She loves her location and is making her niche with tamales that are unique.

“I can make chicken or beef tamales,” she says, “so why not change the flavor?” She was playing with some masa and thinking how she didn’t care much for pumpkin pie. So she decided to make pumpkin tamales. She baked a pumpkin, added some sugar and cinnamon, “… and when I tasted it, wow!” Now she makes piña colada, chocolate, strawberry or peach tamales—basically whatever fruit is in season. One dozen tamales sell for $20 and they are definitely customer favorites.

Coffey will cater events for crowds from 10 to 200. She slowly is building her catering business. “I get to meet a lot of people, and I like it,” she says.