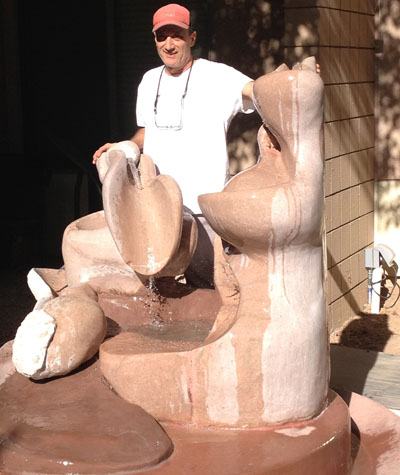 Sculptor Fred Bendheim, who originally created this marble water sculpture for Frank Lloyd Wright’s “The Pottery House” in Paradise Valley, reclaimed it after the house was torn down and donated it to the Beatitudes Campus in Phoenix in 2013. Bendheim was on-hand for its installation and dedication on Sept. 23 (submitted photo).

A marble water sculpture, “Tao” by renowned artist Fred Bendheim, was dedicated Sept. 23 at Beatitudes Campus in Phoenix. The sculpture was originally commissioned for Frank Lloyd Wright’s “The Pottery House” in Paradise Valley, and was designed and constructed from 1982-1983. It was donated to Beatitudes Campus by Bendheim.

The sculpture is made from Tennessee pink marble, water and colored concrete, and is over 5 feet high and 4 feet wide. “Tao” is an homage to Arizona desert canyon lands and the artist’s family. It was rebuilt and relocated to Beatitudes Campus in 2013, and installed at the campus earlier this year.

Funds from the Dan, Kathy and Samuel Mardian Memorial Fund at Beatitudes Campus were generously directed for the installation of the water sculpture.

“Being able to enjoy this beautiful sculpture at Beatitudes Campus is a privilege, and we are honored that Fred Bendheim donated such an important piece,” says Michelle Just, president and CEO at Beatitudes Campus.” The sculpture combines many elements of nature and will be admired for years to come by campus residents and visitors alike. Its location on Central Park Mall in the heart of the campus makes it accessible to all who live here, work here and visit here.”

“I donated ‘Tao’ to Beatitudes Campus because I knew it would be enjoyed by more people as a public art sculpture than if it were placed in a private setting,” says Bendheim. “The inspiration for ‘Tao’ was the Arizona canyon lands, Taoist philosophy and my family. The sculpture has had an interesting and difficult journey to its present and, hopefully, permanent manifestation. It took me nine months to carve. It has survived two acts of destruction, three locations, neglect and mishandling; but, like the human spirit, it has found a way to prevail.”