Metrocenter Mall not being razed

A rumor circulating about the demolition of Metrocenter Mall has prompted mall officials to assert that Metrocenter isn’t going anywhere.

“The public’s response confirms what we’ve known for a long time—that Phoenix residents hold a special place in their hearts for this retail landmark,” said Warren Fink, chief operating officer for Carlyle Development Group, the owner of Metrocenter Mall. “We feel the same way, which is why we’ve worked so hard to create concepts that will revitalize Metrocenter without losing its history.” According to Fink, this includes a number of different concepts in the planning stages, but none at this time that include a complete demolition. 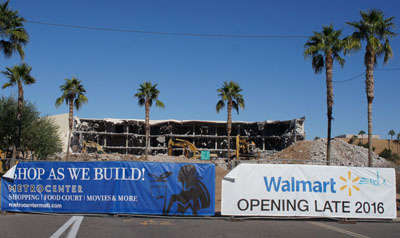 Despite rumors floating around Phoenix that Metrocenter Mall is slated for total demolition, the only building that has come down thus far is the old Broadway department store, which was razed in November 2015 to make way for a new Walmart Supercenter that is set to open next year (photo by Teri Carnicelli).

“Our vision is to create a mixed-use palate that makes the very best use of this site—both its existing space and parts of the property that can support redevelopment or new development, such as senior housing, multifamily housing, corporate office, healthcare and additional retail, restaurant and entertainment amenities,” said Fink.

“Shoppers flock to this type of dynamic combination. It’s what communities want and it’s what we want to provide. This will almost certainly include some level of redevelopment and new development, but not an entire demolition.”

One of the first projects to move forward at Metrocenter has been the construction of a 148,000-square-foot Walmart Supercenter, which upon completion will sit directly adjacent to Metrocenter Mall, at the site of the former Broadway building. The development marks the single largest capital investment in Metrocenter Mall in decades. Other benchmarks on the horizon include the extension of Light Rail to the Metrocenter site, with an on-property Light Rail stop expected to be open and operational by 2023.

“The bottom line is that there’s a tremendous opportunity to do great things here. We won’t be saying ‘goodbye’ to Metrocenter for a long time,” said Fink. “We will be saying ‘hello’ to a new hub that we hope will serve the community for years to come.”