Home / Business / Firefighters train in site to be torn down

Firefighters train in site to be torn down

Days before it demolished an old retail building to make way for View 32—the North 32nd Street corridor’s first new urban apartment project in decades—Watt Communities of Arizona turned the space over to Phoenix firefighters for a rare opportunity to kick, drag and drill through interiors as part of real-time emergency exercises. 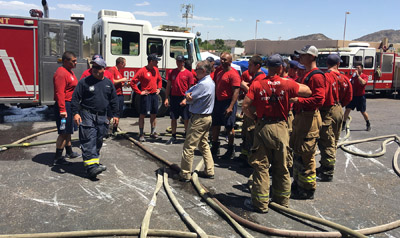 “Firefighters don’t typically get to conduct training in actual buildings, so this was unique,” said Steve Pritulsky, president and CEO of Watt Communities. “We were thrilled to offer up our property, and we want to spread the word to other building owners. This is a simple way to make a tremendous contribution to our firefighters.”

Located just north of the northeast corner of 32nd Street and Shea Boulevard, the vacant building was constructed in the mid 1980s as an office/retail center. It was most recently occupied by six retail tenants who gradually vacated the property in preparation for its demolition and the construction of View 32, a 135-unit upscale, for-rent apartment complex.

“This building was perfect, because while it was empty, all of the interiors and infrastructure were still in place—doors, walls, wiring and ventilation,” said Phoenix Fire Department Battalion Chief Mark Huff. “It gave us a realistic setting with an important benefit: we could break down walls, conduct a roof attack that coordinated our Engines and Ladder companies, and complete other exercises that firefighters have to execute regularly on actual emergency calls.”

The department also used the 32nd Street building exercises as an opportunity to shoot a training video, which it is in the process of completing now. According to Huff, the department has had 10 or fewer opportunities like this in the last two to three years, but they are always seeking more. “It is a constant need that we don’t get fulfilled often enough,” he said.

To volunteer a vacant building for Phoenix Fire Department exercises, contact Mark Huff at 602-534-6081 or mark.e.huff@phoenix.gov.