By Don Ketchum, XCP Sports Media
Laurie White is a humble, selfless person. She normally doesn’t like the spotlight shining on her. She just does her job with kindness and a smile. 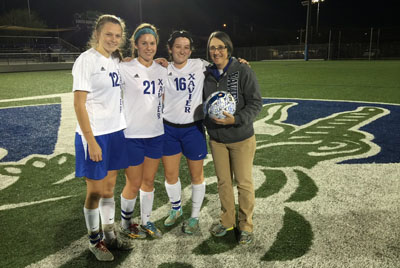 White, who recently completed her eighth season as Xavier College Prep’s head athletic trainer and nearing 30 years in her field, was honored earlier this year when she became the first female to be inducted into the Arizona Athletic Trainers Association Hall of Fame.

“This is a great honor,” White said during Xavier’s soccer match against Phoenix Mountain Pointe on Jan. 22.

The soccer team honored White in a special way at halftime, when a handful of players presented her with a soccer ball signed by Coach Barb Chura and all of the team members. It was special in that many of her players also were her students in the two sports medicine classes and the advanced wrapping and taping course that she leads at XCP.

White grew up in Connecticut, where she was a three-sport athlete in high school. She played field hockey, basketball and softball. She developed an interest in sports medicine during that time. One of her close friends was a cheerleader who fell during a pep rally. When a man attempted to help the friend, White blurted out, “No, don’t move her!”

“I guess that’s where it really started,” White said.

She moved to Arizona in 1985, became certified in 1986 and got her first job in 1987. That was with a sports medicine program at Phoenix Carl Hayden and Phoenix North highs that was overseen by then-Phoenix Suns physician Dr. Paul Steingard.

She then went to Phoenix Barry Goldwater in the Deer Valley Unified School District for two years before returning to the Phoenix Union High School District at Phoenix Alhambra for a number of years.

White heard of the job opening for head athletic trainer at Xavier through a friend. She applied and was hired.

“It felt like it was meant to be,” she said. “I have really enjoyed my work here.”

Coach Chura couldn’t say enough about the job White has done. “A couple of years ago, we had eight or nine of our top players who weren’t sure they were going to be able to play in the state tournament because of injuries, but Laurie put them all back together. I haven’t seen anyone better at any level.”