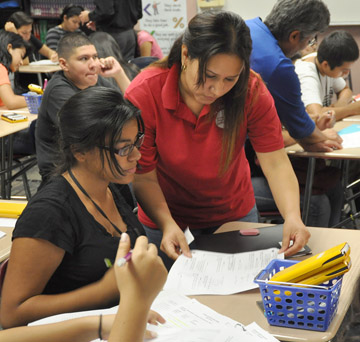 Erika Parra, a math teacher at Metro Tech High School, recently was selected as a 2014 Chicanos Por La Causa Esperanza Award winner. According to Metro Tech counselor Dora Villa, who nominated Parra for the award, “Students can find her in her room ready to tutor during her own lunch hour, after school and even on Saturdays. They are not afraid to ask for help, and they appreciate how she encourages them.” (submitted photo).

Fifteen years ago, Erika Parra came to this country as a sophomore in high school, unable to speak English. Now she is an exemplary teacher, giving hope to students through her example.

The Metro Tech math teacher has been selected as a 2014 Chicanos Por La Causa Esperanza Award winner, honoring Latino teachers who inspire students of all backgrounds, play an active role in the school, and demonstrate a true commitment to the community. Parra is one of four Arizona educators who was recognized on Oct. 23; each received a $5,000 stipend and a $2,500 donation to their respective schools.

Parra teaches Freshmen Honors Algebra, and Geometry. She was elected to lead the school’s Algebra Professional Learning Community (PLC), she sponsors the Math Club and MEChA, mentors two new math teachers and volunteered to coach the first girls soccer team this year. Parra’s path to the classroom came after she served in the U.S. Army, but the seeds were planted earlier.

“I was one of those kids that would always pretend to be a teacher, but the language barrier was a big challenge for me,” Parra said. “It was during my high school graduation that my math teacher told me, ‘I want to see you back as a teacher.’ That was the moment I started thinking about going into teaching. I see my career as an opportunity to give something back to my community.”

Parra, a Camelback High graduate, began as a special education instructional assistant at Metro Tech in 2005, and an ELL Instructional Assistant at North High for four years, before beginning her teaching career in 2010 at Metro Tech. She has earned bachelor’s degrees in Mathematics and Secondary Education, and a master’s in Curriculum and Instruction from Arizona State University. She is working on another degree as well as her National Board Certification.

“I identify with my student,” Parra explains. “For most of them English is their second language, so I encourage them to become someone in life, and break the chain in their family, and become the first ones to get a higher education.”

“Ms. Parra’s students love her because they sense her passion for teaching and for them, as individuals,” counselor Dora Villa wrote in her nomination letter. “They are not afraid to ask for help, and they appreciate how she encourages them and makes them feel like they can learn the math they could never ‘get.’ Students can find her in her room ready to tutor during her own lunch hour, after school and even on Saturdays.”

The Esperanza Awards continues to be the only awards program in Arizona that specifically recognizes Latino teachers who are nominated by their peers. To date, CPLC has recognized more than 100 outstanding Latino educators who continue to inspire future generations and positively impact communities in Arizona.