The nonprofit Girls Leadership Academy of Arizona (GLAAZ), the only all-girls public high school in the state, last month marked the graduation of the first class to attend for all four years. There were 33 seniors graduating, and all of them were accepted into college. 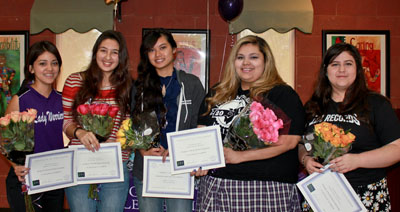 Most of the young women are of Hispanic heritage and many are the first in their family to attend college. In addition, they often have significant financial need, and have overcome major obstacles to remain in high school and now attend college.

A surprise assembly was held on April 24 to present a total of $13,000 in scholarship awards to five outstanding students: Bianca Garcia, Ginelly Powell, Christy Sok, Ana-Leeza Reyes, and Adrianna Galvan.

Bianca Garcia received $5,000, and has been accepted to Barrett, The Honors College at Arizona State University, where she plans to study biomedical engineering/pre-med. She wants to focus on innovative and accessible low-tech/low-cost solutions for people without access to medical service, both globally and locally. She also received a $6,000 scholarship from ASU. She enrolled in every AP course the school has offered, and graduated with 23 credits from Phoenix College.

Also receiving a $5,000 scholarship was Adrianna Galvan, who has been accepted to Simmons College in Boston and Agnes Scott College in Georgia. She has not yet decided where she will attend. She plans on becoming a middle-school teacher. Galvan also enrolled in every AP course at GLAAZ, and completed 23 credits from Phoenix College prior to graduation.

Ginelly Powell is one of three students who received a $1,000 scholarship. She has been accepted to Northern Arizona University, where she plans to study to become a special education teacher and work with special needs youth/children. Powell also has received a $2,500 scholarship from NAU. She was a finalist for the Dorrance Scholarship. Powell earned 14 college credits upon graduation.

Cristy Sok, who received $1,000, hopes to go to school in California where she wants to study marine biology. Sok was a member of the recycling club at GLAAZ for all four years. She acquired 14 college credits prior to graduating.

Ana-Leeza Reyes, who received $1,000, hopes to attend the University of California at Santa Cruz, where she wants to study business management and economics. Reyes spearheaded advertising and social media campaigns for the school’s yearbook. She graduated with 13 college credits.

The Girls Leadership Academy of Arizona is located at 715 W. Mariposa St. For more information, call 602-288-4518 or visit www.glaaz.org. Tours for prospective students and their parents are available.