By Rachel Egboro
Jessica Franchy of Phoenix had been breastfeeding her youngest son for 18 months, just like she had for her older sons. But nursing had become a way for her to manage what she describes as her youngest son Joaquin’s “famous tantrums.” 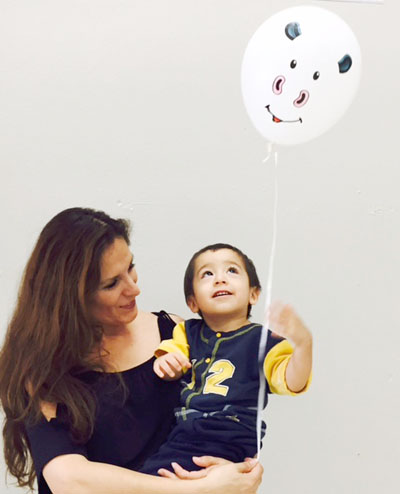 Jessica Franchy of Phoenix was struggling with managing her son Joaquin’s disturbed sleep cycles and temper tantrums. She called the Birth to Five Helpline and got the support and advice she needed to bring harmony back into her home (submitted photo).

Nursing Joaquin until he fell asleep was the only thing that worked, Franchy said. This in turn disturbed his sleep cycle at night. He’d awake two to three times a night asking to be nursed. Franchy was exhausted and the harmony in her household was disrupted.

Franchy needed a solution that was best for her whole family, so she called the Birth to Five Helpline, a free program funded by First Things First. The Helpline is open to all families with young children looking for the latest child development information from experts in the field.

Helpline Specialist Claudia Tsiaousopoulos affirmed the advice Franchy had received from her family and her Internet searches. It was time to wean her son off breastmilk.

Franchy approached this solution with mixed feelings. She felt guilty about weaning her son after successfully nursing his older brothers for longer.

“She was really trying to be there for her child, but she was tired because she wasn’t able to sleep,” said Tsiaousopoulos, who coached Franchy over the phone with a variety of strategies to transition Joaquin.

“We always want families to call so we can brainstorm other ideas that can work,” Tsiaousopoulos explained. “Some moms just need a little push to help them towards their goal. Now, Jessica feels free and confident rather than guilty and unsure.”

Having someone on the other end of the line saying “You can do it!” made all the difference, Franchy said. “I called the helpline every two weeks. Claudia kept giving me ideas and I felt supported.”