Being able to safely and conveniently cook anywhere there is sun prompted North Central Phoenix inventor Dave Thompson to develop a solar cooker that is portable, durable and affordable. 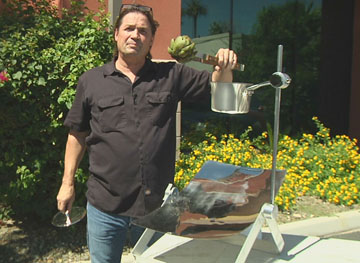 He added that cooking with sunlight reduces exposure to harmful residues that are inherent with carbon-based fuels like charcoal, wood and propane.

“Solar cooking is a smokeless process that is better for your family’s health and the health of the planet,” he pointed out. “In developing countries, respiratory illness and death is common from cooking indoors with wood, coal and burnable garbage.”

Sol-Man can be used in fire-restricted campgrounds, rest areas, the beach or for tailgating. It needs no tools to assemble and can use a variety of sizes of pans with handles. It consists of an A frame base, rectangular parabolic reflector and a cooking pan arm.

To help get the solar cooker in the hands of customers, Thompson is crowd-funding the Sol-Man Solar Cooker on the popular site Kickstarter. The new campaign launched last month and runs until Jan. 25. He hopes to raise $50,000 either through donations or sales of the Sol-Man, which is going for $99 on the site.

Thompson hopes people will see the need for Sol-Man in areas of the world where facilities for even the simple task of boiling water are not available. Kickstarter backers can purchase a Sol-Man, with the option to purchase an additional solar cooker that will be donated to someone who cannot afford to purchase it on their own. Donation events are being arranged in Haiti, Mexico and on the Navajo reservation where many people live in isolation miles away from stores that sell charcoal and propane.

Backers also can choose an option for receiving T-shirts with QR codes that link to operating instructions and solar cooking recipes.

Another benefit to the portable Sol-Man is being able to safely drink water from a lake or river where people camp or live nearby. The solar cooker reaches and exceeds the high temperatures necessary to pasteurize water and liquids. Pasteurization kills the microbial growth and volatile organic compounds that can cause serious illnesses.