By Teri Carnicelli
The previously nondescript building that houses the Joseph F. Monfort VFW Post 9400 at 804 E. Purdue Ave. in Sunnyslope is now proudly sporting a large waving flag on its southern wall, thanks to a donation from a New York artist.

Scott LoBaido of Staten Island, N.Y. has been an artist his entire adult life and has painted flags for more than 25 years on rooftops, walls, doors, vehicles and more. “We have this wonderful gift called the First Amendment that tells me I can paint what I want, where I want. Focusing on veterans’ buildings is my own way of saying thank you to them for that gift of freedom.” 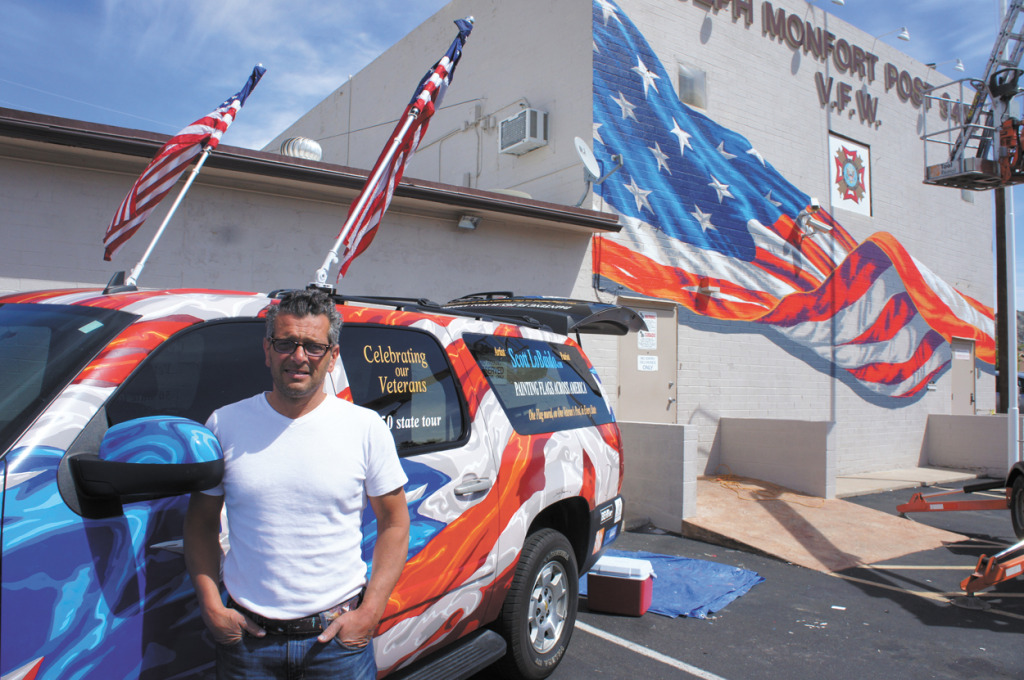 Scott LoBaido, an artist from Staten Island, N.Y., is traveling around the country painting American flags on buildings belonging to veterans’ groups such as the Joseph F. Monfort VFW Post 9400 in Sunnyslope, which received its flag art over the course of three days in March (photo by Teri Carnicelli).

LoBaido has pledged to paint an American flag on one veteran’s post in every state in the contiguous United States. He started his journey on Feb. 20. The Sunnyslope VFW Post was number 11 completed, and the tenth VFW post. The other building belonged to an American Legion post.

He selects the posts by first searching online and looking at photos of their buildings to find one that has just the right wall. It has to be the right size, the right shape, and not have a lot of other things on it like marquee signs or big light fixtures, LoBaido explains.

Bob Hysko, Post Commander in Sunnyslope, says he received a phone call in January from one of LoBaido’s associates. “I thought at first it was a solicitor; but, we were looking to have something like that done anyway, so instead of hanging up, I asked how much they would charge,” he recalls. “When they said ‘nothing,’ I said we were definitely interested. At the time we were one of several buildings being considered in Arizona. Then they called back later and said we had been chosen.”

Hysko expected the wall art to be a typical flat, stretch out flag, and was amazed to see the almost three-dimensional effect LoBaido was able to create using shadows in the white areas.

“It was much more than I expected,” Hysko said. “I really had no idea; it is just beautiful.”

The entire post building was given a new paint job in November 2014 thanks to a grant from Home Depot. The building had been getting “tagged” with graffiti on a regular basis—particularly on that south-facing wall. Hysko was worried that the taggers would come back and damage it, but so far, he says, they’ve left it alone. Perhaps that same symbol of freedom that inspired LoBaido has had an affect on the vandals, as well.

To thank LoBaido for his generosity and his artistry, the post gave him a framed certificate for Americanism in honoring the flag, and the post’s own Distinguished Service Medal, which has an American flag on one side, and POW/MIA inside an outline of the state of Arizona on the other. The post is named for Joseph Monfort, who died in a Japanese internment camp during World War II. Monfort’s sister donated the land to the post, which currently boasts more than 780 members.

LoBaido has been fortunate to have several sponsors assist him with his tour, including Behr, which supplies the paint, and Home Depot, which supplies the crane in each location from a local store. Other sponsors include Tunnels to Towers Foundation and City Quiet Windows. For more information, visit www.scottlobaido.com.